One word that comes up often when talking about cold brew coffee is “clean.”

Brands promote the beverage’s low acidity, rich taste profile, and smooth mouthfeel, as an upgrade from traditionally brewed black coffee to a treat for many consumers. That stripped-down approach has also given cold brew coffee a reputation as a healthier alternative to cloying iced lattes.

But even with this new, healthier option in stores, many coffee drinkers still have a strong sweet tooth, and as they make the leap from traditional iced to cold brew they’re looking to bring the milk, sugar, and delicious flavorings with them. As cold brew grows past its infancy, many brands are now embracing consumers’ desire to indulge. Others are going high-octane, embracing calories that fit with a specific nutritional philosophy. This crossroads of approaches to cold brew has led to an influx of innovation that’s been especially prominent in the past year, producing not just sweeter sub-lines, but also exotically flavored SKUs, along with emerging nitro-infused and sparkling coffee lines.

Given the investments into a cohort of cold brew companies and the pervasiveness of the new style, it’s likely that stores and distributors are going to need to find room for both clean and sweet cold brew styles. Thus far, it’s been left to individual companies to carve out their own philosophy towards indulgence. Some brands have dedicated themselves to the clean ethos, but in a craft-centric beverage category that is growing fast, a little bit of hedonism may be what is taking cold brew from an emerging beverage to a standard order. 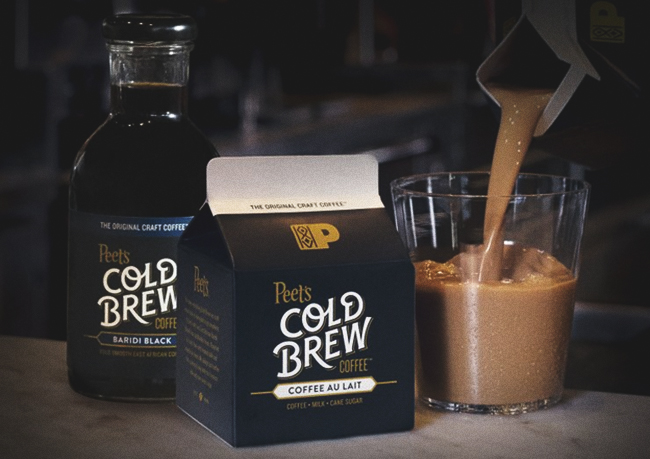 According to Dave Burwick, president and CEO of Peet’s Coffee & Tea, versatility is in large part what has driven cold brew’s growth. The beverage’s strength, he said, comes from meeting several different “need states” for consumers, and the more need states a drink fulfills the more likely it is to succeed. With cold brew, higher amounts of caffeine provide functional energy and the chilled temperature meets the need for refreshment. Cold brew can also be either healthy or indulgent. Which need consumers are more drawn to, he said, can come down to the individual or even to the time of day.

“I think health, as we know, is critically important,” Burwick said. “That’s where consumers are going — toward healthier beverage and food consumption. But at the same time people want to reward themselves with an indulgent treat. Whether you’re going out to In N’ Out Burger for lunch occasionally, or if you’re going to pick up a sweeter, dairy-based cold brew coffee in the afternoon as a reward.”

Last month, Stumptown Coffee Roasters, which is owned by Peet’s, launched at its cafes a line of sparkling cold brews made from mixing coffee concentrate with soda water. The new line contains between 23 and 24 grams of sugar and 100 calories per can, and proved a success among the consumers looking for that afternoon reward with an energy kick. Peet’s itself launched last year a ready-to-drink black cold brew along with more hearty Coffee Au Lait and Dark Chocolate varieties. 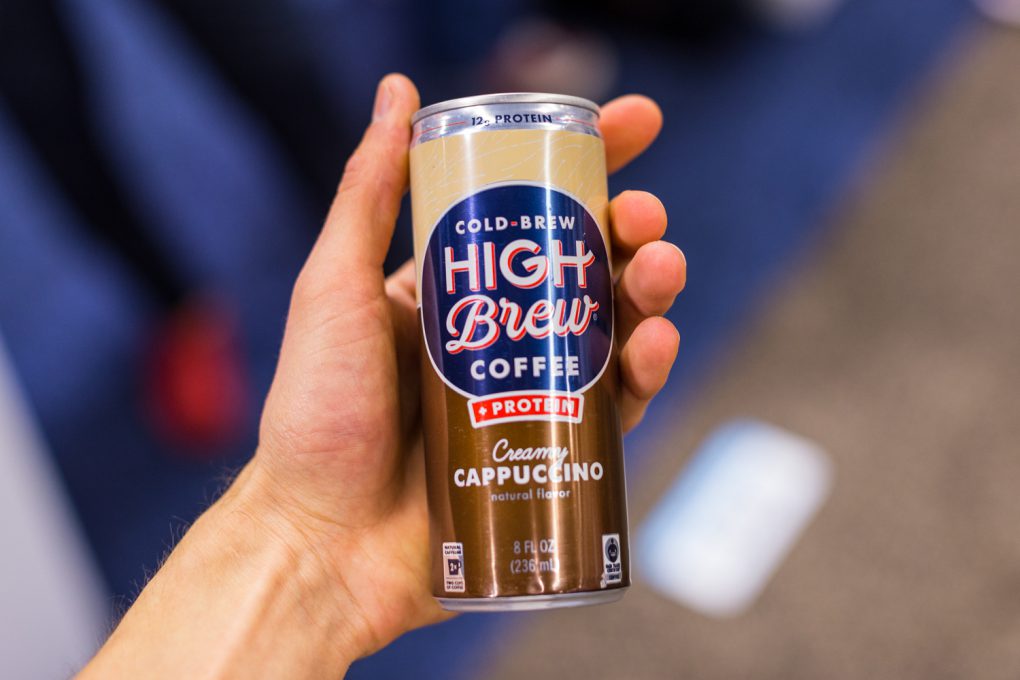 Even among brands that have a stronger affiliation with function, tastier blends are playing a bigger role in their product lines.

“A lot of people look at their coffee beverages almost like a treat, like a dessert,” said High Brew founder and CEO David Smith.

High Brew, which early-on emphasized caffeine content and low acidity as key product attributes, is one of the many cold brew brands that has also come to balance those ideas with consumers love for sugar. The brand had initially carved out a niche by releasing its flavored SKUs with a blend of cane sugar and stevia for sweetness with a lower calorie count, but internal research showed that no matter how subtle the flavoring at least one-third of consumers are put off by stevia. Not wanting to alienate a significant portion of the market, High Brew changed its formula to include more sugar. The calorie count per can jumped from 60 to 90, but for calorie conscious consumers being under 100 is often the magic number. 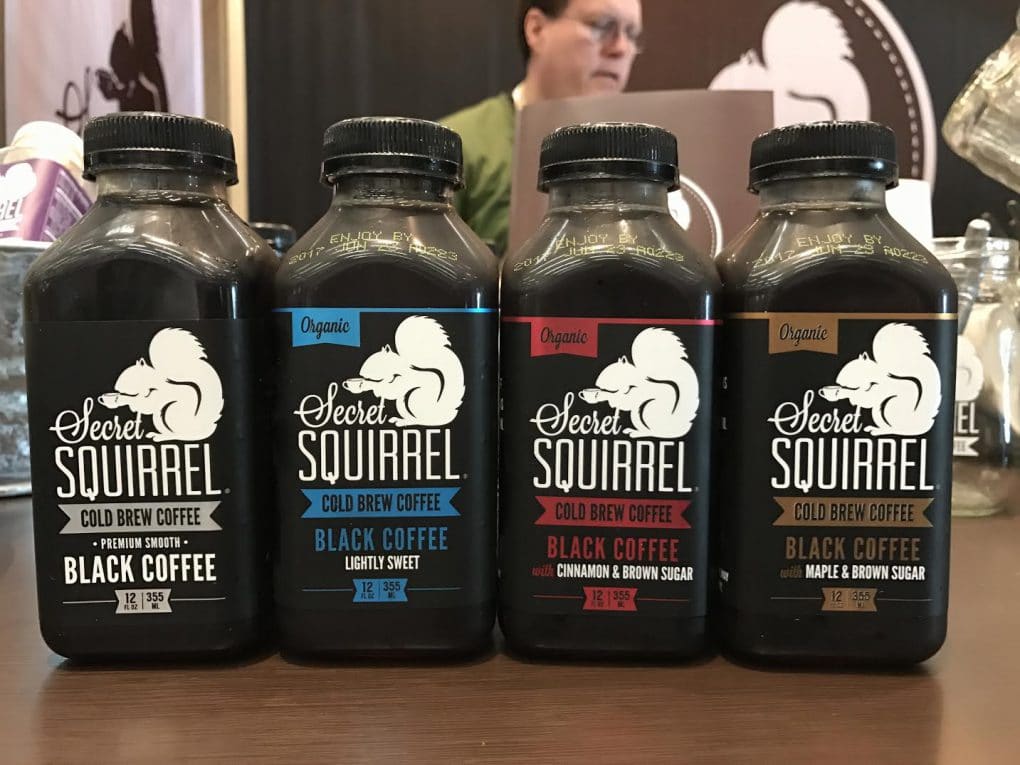 Smith said the new line was inspired by his sister, who used to create “poor man’s lattes” at cafes, saving money by ordering plain black coffee and taking advantage of the free sugars.

Secret Squirrel also offers a number of dairy-based lattes, including new chicory and citrus caramel SKUs, but the sweetened black coffees came from a concern that the company may be leaving people behind if it fully embraced dairy.

Even dairy alternative lattes have embraced the fun of indulgence. Jittery John’s has two Brazil Nut lattes, while indulgent at 130 and 146 calories respectively, offer a tasty dairy-free option.

But for those looking for a non-caloric addition to give straight black cold brew a creamier mouthfeel there is nitrogen. Nitro coffee has quickly emerged since Stumptown applied the classic Guinness technique to its cold brew in 2015. While Stumptown is happy to embrace many varieties of coffee, nitro’s appearance on the market has given other companies a chance to steer clear of sugar and dairy.

At RISE Brewing Co., co-founder Jarrett McGovern got his start by making nitro cold brew. After experimenting with nitro matcha and coffee-beer fusions, he told BevNET he hopes his new company will go on to own nitro as its signature. 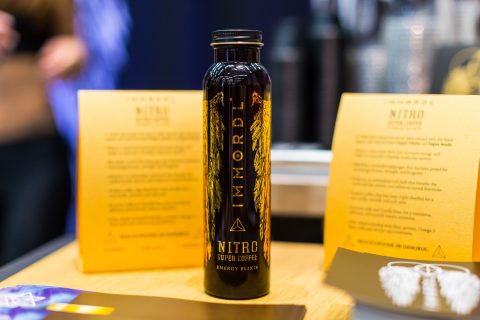 Not that calories are necessarily representative of straight indulgence. Following the paleo-friendly butter coffee trend, a pair of brands at Natural Products Expo West 2017 touted the benefits of cold brew mixed with paleo diet and biohacker-friendly MCT oil, along with nitro.

Caveman Coffee, co-founded by athletes Tait Fletcher, Keith Jardine, and Lacie Mackey, produces an RTD black nitro coffee. Fletcher, an MMA fighter, told BevNET the goal of creating Caveman was to create a healthy and energizing coffee for athletes and other consumers serious about taking care of their bodies. The goal of Caveman, he said, was not originally to start a business but to start a movement — one that emphasized “eating yourself healthy.”

In addition to selling highly-caffeinated black coffee and a concentrate, Caveman also sells a MCT coconut oil which boosts energy, stamina, and metabolism, and aids in digestive health and mental clarity. The company recommends blending the oil with coffee and grass fed butter as a paleo-diet friendly creamer.

Another new brand, IMMORDL, is also on the nitro-powered, paleo and MCT oil train as well. While each bottle contains two servings at 180 calories each, the brand embraces energy and power with a workout philosophy — not sugary indulgence.

Regardless of whether the calories are for fun, for bodybuilding, or nonexistent, cold brew continues to evolve and fresh innovation will be the force behind its ascendency into the mainstream coffee world. Indulgence will need to play a role in this evolution, just as it has in iced and hot coffee.

“Innovation will drive the category growth and it will bring more consumers into the category,” Burwick said. “We’ve seen it across the board with everything from sparkling cold brew, as Stumptown just launched, along with anything dairy-based and different types of flavored cold brew products. The category is doubling almost every year and with that it’s going to be led by innovation, as it always has.”