It didn’t take long for Andrew Buerger, co-founder of B’More Organic, to jump into the skyr business. In fact, it only took one taste.

While participating in a fundraising climbing expedition, a guide served Buerger and his wife a mountainside breakfast of granola topped with skyr. Within minutes, Buerger, a self-described “health nut,” recognized he had found the convenient, low-sugar, protein-rich snack he had long been seeking. The only question was how to bring the beloved Icelandic food to the American consumer.

“I said ‘Oh my god — this is the world’s healthiest food!’” Buerger told BevNET. “I said, ‘This is what I want to do with the rest of my life.’”

Since founding B’More Organic in 2011, Buerger and his wife and co-founder Jennifer have made good on that promise, preaching the gospel of Icelandic skyr to consumers in the U.S. Their line of organic skyr smoothies are now available nationwide in seven flavors: plain, strawberry, mango banana, caffe latte, vanilla and coconut.

Skyr, which was introduced to Iceland by Vikings from Norway centuries ago, is distinct in its production method and nutritional content. While brands such as Siggi’s and Icelandic Provisions market non-drinkable skyr products, B’More Organic believes it has a new angle on the category with its smoothies.

“Our product is different from everyone else’s because really no one else is doing a strained, drinkable yogurt,” said Buerger.

To make its skyr, B’More Organic turned to a small group of sustainable farms in Pennsylvania to source organic skim milk from grass-fed cows. The Buergers heat the milk alongside a starter culture and then strain it, leaving behind a concentrated liquid that’s low in sugar and high in protein. Though consumers may think of skyr as a yogurt, it is technically considered a fresh cheese and does not contain lactose. 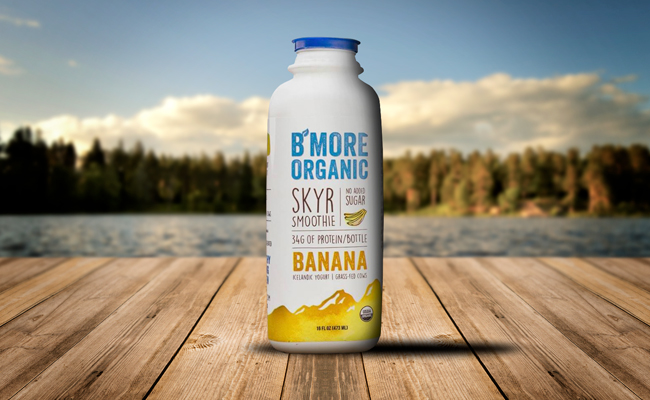 To make its distinct smoothie product, B’More Organic combines the skyr liquid with a variety of organic ingredients, such as coffee, vanilla extract and fruit purees, along with organic stevia extract for sweetness. Depending on the variety, each SKU contains between 30 and 40 grams of protein per 16 oz bottle.

Originally Buerger began the company by selling out the back of his car to local stores, but sought to scale up quickly. The company now has six full-time employees working from its offices in the Hampden neighborhood of Baltimore, Maryland. According to Inc., which placed B’More Organic Organic at #20 on this year’s edition of its annual list of the top food and beverage companies, the brand has seen 810 percent growth over the last three years.

While the product’s appeal to the Whole Foods and Sprouts shopper may seem obvious, B’More Organic’s sales strategy hasn’t focused solely on the natural channel. Buerger said that around 80 percent of the company’s total sales has come through its conventional retail partners, such as Kroger (750 banner locations), Publix (1100 locations) and Wegmans.

“We’ve gotten much faster and greater acceptance in the conventional channel than we have in the natural grocery channel,” he said, noting that the company only just recently entered its second region with Whole Foods. “For conventional stores looking to add organic products to their set, we hit a lot of touchpoints with them as they are trying to figure out how to get millennial shoppers.”

Outside of traditional brick and mortar retailers, B’More Organic has focused on food service options within the Baltimore community. Buerger said that the company has benefitted from Johns Hopkins University and Hospital System, the city’s largest employer, making a concerted effort, along with other local schools and health facilities, to offer Baltimore-based food and beverage brands at their places of business.

Yet B’More Organic’s biggest marketing initiative to date took them outside of Charm City; in June, the company announced the addition of NFL players Braxton Miller and rookie Jalen Reeves-Maybin as the company’s first athlete brand ambassadors.

Looking ahead to further innovation, Buerger said the company plans to reduce its bottle from 16 oz to 12.8 oz by the end of this year in response to feedback from female consumers. A kid-oriented skyr product is also set to launch sometime next year, which should further realize Buerger’s vision of delivering a healthy protein-packed beverage with broad appeal.

“I think we do a pretty good job [of appealing to men and women],” said Buerger. “I want it to be approachable for everyone.”