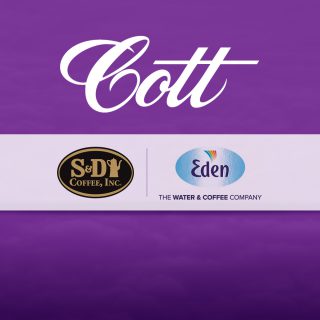 Executives from Cott Corporation called 2016 a “year of ups and downs” during a quarterly earnings and fiscal year-end review call today, as revenue growth and brand diversification, fueled by the acquisitions of S&D Coffee and Eden Springs, were offset by the negative impact of Brexit on foreign exchange rates.

The Tampa, Fla.-based Cott produces a wide range of beverages on behalf of retailers, brand owners and distributors, ranging from carbonated soft drinks and shelf-stable juices to sparkling waters and energy shots. It operates manufacturing facilities in the United States, Canada, the United Kingdom and Mexico. The company also has interests in water and coffee direct-to-consumer services through its subsidiary DS Services, which it acquired in 2014 for approximately $1.25 billion.

In a statement, Cott CEO Jerry Fowden explained that the company was making progress towards its goal of becoming a “more diversified, higher margin, cash generative business.”

The additions of Eden Springs and S&D Coffee & Tea were the primary drivers of an 89 percent increase in 2016 Q4 revenue compared to the same period last year, going from $256 million to $483 million.

Cott’s leadership team praised the impact of the company’s August 2016 acquisition of S&D, the leading food service provider of roasted coffee in the U.S., for approximately $355 million on a debt and cash free basis. The company, a subsidiary which continues to operate under its own name, generated around $141 million in revenue in the quarter, which was in line with expectations, according to a press release.

Earlier in 2016, Cott also acquired Eden Springs, a Switzerland-based direct-to-consumer services provide specializing in coffee and water delivery for commercial and residential clients, from Rhone Capital for a reported $525 million. The company generated $87 million in revenue during Q4.

Both acquisitions represent a concerted effort by Cott to shift attention away from carbonated soft drinks and shelf-stable sweetened juices and towards better-for-you beverage options. Fowden noted that both those categories represented only a fifth of the company’s portfolio.

Cott’s biggest challenge in 2016, according to executives on the call, was Brexit, a referendum vote in the U.K. which resulted in the country’s decision to leave the European Union. Fowden called the result a “surprise” that helped spark $24 million in foreign exchange headwinds, costing the company around 3 percent in total revenue.

Fowden also noted the impact of one less week of operations at DS Services which he said accounted for nearly $13 million in lost revenue.

Looking ahead to 2017, Fowden said the company would continue to focus on increasing cash flow, which he called a “key valuation metric.” He said the company aims to have $155-$175 million in adjusted free cash flow next year, with a projection of $225-$275 million by the end of 2019.

Responding to a question at the end of the call, Fowden noted that Cott has not seen any material impact on its various businesses from the various sugar taxes recently enacted in the U.S. in cities like Philadelphia and San Francisco, among others. He noted that the company had historically overtraded on the low- or zero-calorie side of the category and already had a range of “hybrid” products that use sugar alternatives in its portfolio.

He added, however, that he “feels for the bottlers” in areas which have approved soda taxes, calling it an “inappropriate and unjust” tariff that disproportionately impacts products he said were “no different” in their impact on obesity than many other food items.

“It’s clear rising obesity has nothing to do with soft drinks,” he said.