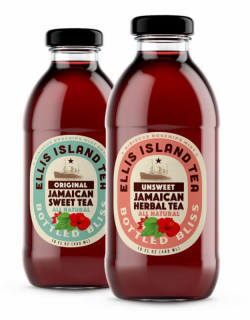 Detroit – (June 16, 2017) – Ellis Island Tea, an all-natural Jamaican Sweet Tea, is on its way to becoming a national beverage brand after receiving a significant boost from a makeover by MSNBC’s “Your Business.”

Ellis Island Tea will soon be taking off in airports from coast to coast now that founder Nailah Ellis-Brown, a Forbes 30 Under 30 entrepreneur, has reached an agreement with HMSHost to place the tea in some of its busiest venues.

The Jamaican Sweet Tea also will soon be landing in Midwest Sam’s Club locations, where Ellis-Brown’s family tea recipe will be the only bottled tea in the juice section of the cooler. As an added bonus, Sam’s Club will feature an exclusive 64-ounce size bottle of Ellis Island Tea, something many consumers have been asking for for years.

And, Whole Foods Market, which was one of Ellis Island Tea’s first major accounts, will be re-launching the beverage brand in its Midwest stores now that the product’s packaging has been given an impressive overhaul by branding experts.

Ellis Island Tea is brewed in Detroit. The beverage company was founded by Ellis-Brown back in 2008 when she began selling her family tea from a cooler in the trunk of her car at the age of 20. Today, the hibiscus-based tea is sold in more than 500 stores, including the newly added airports, Sam’s Clubs, Midwest Whole Foods Markets, all Meijer stores and Michigan Kroger stores.

Ellis-Brown’s real challenge has been expanding her brand beyond the Midwest with limited marketing funds. She knew the tea’s labeling didn’t do its job effectively, but was at a loss for how to fix it. Ready to grow, she reached out to MSNBC for help.

MSNBC’s “Your Business” producers paved the way for Ellis-Brown to meet with Sam’s Club executives, coordinated meetings with distributors and brought in a team of beverage experts to guide a rebranding process.

“When I agreed to do the MSNBC “Your Business” Makeover, I had hoped that I would get some great advice to advance my bottled tea nationally,” Ellis-Brown said. “But what I got was so much more. The rebranding done by Skidmore Studio is going to give me a serious competitive edge against much larger beverage brands. The new look tells the story of my family tea and it visually pops on the shelves. That’s critical. Once people try my tea, they love it, but my packaging needed to entice them to pick it up and then to buy it. The new labels do that.” 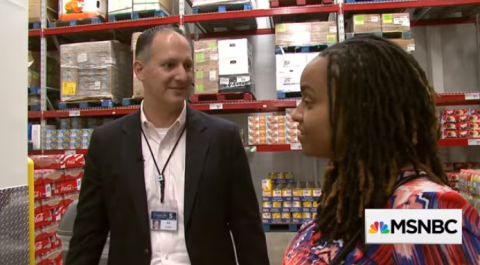 The rebranding also offered clarity. For years, Ellis-Brown grappled with finding a simple way to describe her tea to consumers, buyers and media. Most understood and loved the intriguing backstory – one that told of Ellis-Brown’s Great-Grandfather Cyril Byron coming to America from Jamaica through Ellis Island and bringing with him his recipe for hibiscus tea. The challenge Ellis-Brown had was explaining in a clear way what the tea was. Most people have tried ordinary teas – green, black, white – but many aren’t familiar with hibiscus.

“We created an entirely new lane (for Ellis Island Tea),” said Kacha Azema, of Skidmore, explaining designers wanted to evoke thoughts of the golden age of travel. “It’s refreshing, relaxing, taking-you-on-a-journey tea. It’s all about taking you on a journey to and from the Caribbean.”

For HMSHost buyers, the rebranding was a deciding factor in agreeing to put Ellis Island Tea into more airports. The tea was already being sold in Chicago’s O’Hare International Airport and Charlotte’s Douglas International Airport where sales were brisk. Still, HMSHost executives wanted to be sure the tea could compete with bigger national beverage brands. An eye-catching design would go a long way, they said.

“If you can move into this direction, we think we can do a lot more business with you,” HMSHost Director of Buying Melissa Timmons told Ellis-Brown after reviewing the redesign. “We’re really excited to get you to the next level.

“Ed Romero, Sr. Vice President/General Merchandise Manager of Fresh at Sam’s Club said he was impressed by both Ellis-Brown and her product.

Whole Foods Midwest Vice President for Purchasing Bobby Turner gave Ellis-Brown one of her first breaks. He said she had a great product with a really good story. The rebranding intrigued him enough to agree to re-launch Ellis Island Tea in his Midwest stores.

Ellis Island Tea is not just any iced tea. It is an all-natural bottled Jamaican Sweet Tea and unsweetened Jamaican Herbal Tea made from hibiscus and other carefully selected botanicals. Its exotic flavor is smooth and refreshing with a hint of citrus. It is rich red in color, resulting from the hibiscus flower, which makes it a standout on store shelves and at events and parties.

Starting her own company back in 2008 stemmed from Ellis-Brown’s lifelong desire to become an entrepreneur. Choosing to brew Ellis Island Tea came from her hope to carry on a family legacy. Ellis Island Tea is inspired by a recipe created by her Great-Grandfather Cyril Byron, a Jamaican immigrant, chef and entrepreneur who told his family the recipe was to be “Sold, not told.” Ellis-Brown honors those words every day working from her company headquarters on Clay Street in Detroit where the tea is brewed.