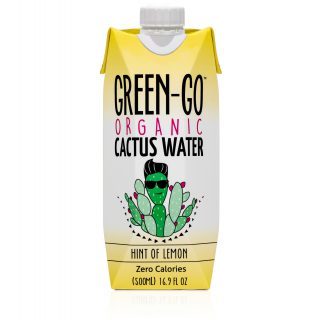 NAPA, CA (October 4, 2017) — A new company, Green-Go™, launched on Oct. 1 with a zero-calorie USDA Organic cactus water derived from the nutrient-rich paddle of the Nopal, or prickly pear, cactus.

“The Nopal paddle is a common vegetable in Mexican cuisine and, in researching the paddle, I found that it is considered to be highly nutritious,” said Lopez. “Studies have tied the Nopal cactus to a number of health benefits, including anti-inflammatory properties. It’s considered beneficial for skin, which is what interested me in the paddles in the first place. It cleared up my severe eczema when nothing else worked.”

The water, with puree from the Nopal paddle, also has hydration benefits.

“Because of Green-Go Cactus Water’s hydration benefits, it is good to drink before or during a workout,” said Lopez. “And one research study has demonstrated that consuming the cactus extract prior to drinking alcohol mitigated several hangover symptoms.”

Lopez grew up in Napa Valley and spent time in the beverage industry after college, and then headed back home to start an organic farm where she was introduced to “Nopalitos,” the edible paddles from the Nopal cactus. Lopez, who suffered severe eczema throughout her life, started eating a paddle a day and her skin began showing vast improvement, she said. After extensively researching the nutritional benefits of the paddles, she began selling them at local farmers markets where she discovered her customers were juicing them and telling her stories of how the paddle helped them. Green-Go was born from Lopez’s desire to find an easy way for people to gain the Nopal paddle’s benefits.

Green-Go, headquartered in Napa, Calif., is a producer of organic, kosher and non-GMO cactus water with the nutritious paddle of the Nopal (prickly pear) cactus as a main ingredient. The company was founded in 2017 by Sarita Lopez, a beverage industry veteran and organic farm entrepreneur, after she saw her lifelong severe eczema clear up when she began eating the paddle and saw its benefits for her farmers market customers who were juicing them. More information about Green-Go organic cactus water is available at 707-944-2039 or www.drinkgreen-go.com.