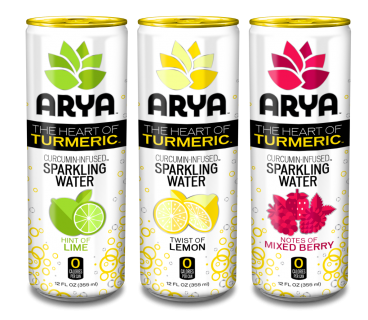 Brand incubator L.A. Libations has partnered with ARYA, a maker of beverages and snacks infused with curcumin, the key bioactive component in turmeric, to help expand the brand’s retail footprint. The deal arrives just a few months after the launch of ARYA, which has introduced a brand revamp and a new sparkling water line in conjunction with the partnership.

As part of the agreement, L.A. Libations, which helps navigate retail placement for innovative brands in nascent and fast-growing beverage categories, has acquired a minority stake in ARYA. Terms of the deal were not disclosed, however, Coca-Cola’s minority ownership of L.A. Libations gives the beverage giant an indirect investment in the curcumin-infused brand.

ARYA was co-founded by biotech executive George Uy and is primarily funded by Handok Inc., a pharmaceutical and consumer healthcare company based in South Korea. ARYA manufactures a proprietary version of curcumin called “Curcumin +” and promotes the ingredient as both more bioavailable and better-tasting than natural curcumin or turmeric extracts. Along with a line of gummy snacks, the company introduced a four-SKU line of drinks called “ARYA Cucumin +” in June, 2016. Each variety was formulated to serve a specific functional need, such as energy and immunity, and the line was carried by several retailers in Southern California, including Gelson’s, Bristol Farms and Vitamin Shoppe.

L.A. Libations co-founder Danny Stepper told BevNET that he first connected with ARYA in November and saw an opportunity to help reframe how the company marketed its primary ingredient.

“They were kind of trying to be all things to all people, when turmeric in itself is plenty and what consumers want,” Stepper said. “We basically streamlined the vision, because that was the ‘hero’ ingredient anyway, peeled away everything else, making sure there was no sugar added and really got the message clear on the packaging.”

The new ARYA Curcumin-infused Sparkling Water comes in three naturally flavored varieties — Lime, Lemon and Mixed Berry — each formulated with zero calories and no added sugar. Each 12 oz. can provides the amount of curcumin found in approximately one tablespoon of turmeric, according to ARYA, which also introduced a new tagline for the brand: “Heart of Turmeric.”

The partnership comes as turmeric, long prized for its natural antioxidant and anti-inflammatory properties, has emerged as an ingredient increasingly embraced by retailers and consumers. According to market research firm SPINS, turmeric-centric products amassed over $67 million in sales across the natural, specialty and conventional retail channels in a year-long period ending on Feb. 21, 2016, a 55 percent increase over the same timeframe a year prior.

Uy said that ARYA’s marketing and education efforts will promote the drinks “as a natural complement to anti-inflammatory diet or lifestyle.”

Despite growing awareness and demand for turmeric, Stepper believes that most turmeric-infused drinks lack a refreshment component and mainstream appeal. The desire to reach a broad set of consumers is the primary reason that ARYA developed the sparkling water line.

“Consumers used to be willing to sacrifice taste for functionality,” Stepper said. “And we’re seeing a large trend definitely as these things go into mainstream retail that consumers still want the functional benefit, but they want it all; they want great taste, too. And AYRA has a really mainstream flavor profile and mouthfeel just like the competitive sparkling waters.”

It’s unlikely, however, that ARYA will initially share shelf space with carbonated water powerhouses like LaCroix and Poland Springs. Instead, the retail strategy will focus on getting ARYA “in the right places for the March resets,” Stepper said. Meanwhile, the company will continue to examine opportunities for innovative brand extensions.

“We believe down the road that Arya can be a master brand for a lot of curcumin-infused things,” he said.