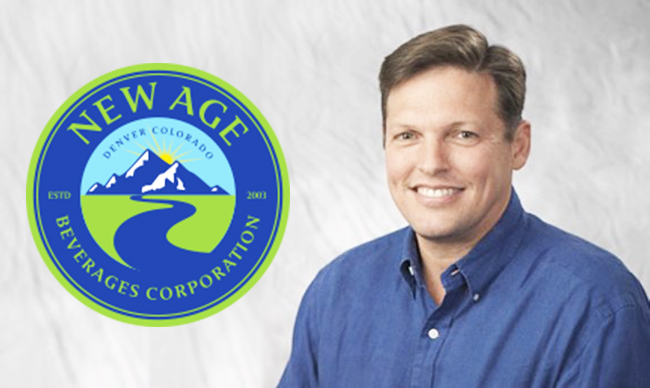 New Age Beverages is living up to its name.

Last spring Brent Willis was looking optimistically towards the future, having just been named as CEO of New Age, a Denver, Colo.-based beverage company, following a $20 million merger between his kombucha brand Búcha and Colo.-based tea line Xing Tea and Aspen Pure water, owned by Tom and Scott Lebon. Powered by a robust national direct store delivery (DSD) network already in place, the opportunities for driving growth through distribution and sales efficiencies provided good reason for Willis to set his sights high. “We can take the position as a world leader in healthy, functional beverages,” he told BevNET at the time.

Twelve months of rapid growth later, his broader vision for what New Age could be is beginning to come into view. Last October, the company announced a merger of operations with Marley Beverage Company, which sells Bob Marley-branded RTD coffees and relaxation drinks, followed by a complete acquisition of Marley assets in April. After raising $17.5 million in new financing in February, the company outperformed expectations when its initial public offering on the Nasdaq Capital Market was four times oversubscribed due to strong investor interest.

Add in last month’s acquisition of coconut water maker Coco Libre — a move that expands the company’s offerings while also securing a coconut water source for additional beverage products in the future — and the question becomes not whether Willis and New Age can run, but whether they can keep up the relentless pace in 2017 and beyond.

“I would say we are in the first mile of the marathon,” Willis told BevNET in an interview last week. “We probably ran our first mile in under six minutes, so we’re going at a pretty good pace. But I expect us to keep up our pace to be quite honest.”

In terms of fiscal performance, New Age emerged strong off the starting blocks in 2016. Despite absorbing more than $2.5 million in losses from the standalone Búcha Company, the company was profitable, with net revenue climbing to over $25 million from around $2.4 million in the prior year. During its annual investor conference call in April, CFO Chuck Ence reaffirmed the company’s sustainable organic business model and projected 7-10 percent revenue growth year-over-year. He also noted that it would be investing in its existing brands, stating “We don’t believe we need more in the portfolio, now we are just focused on driving it and building the intangible assets and brand values in the firm.”

Willis said the company isn’t looking to stop seeking out attractive acquisitions, but will only consider opportunities that meet specific criteria. All of New Age’s acquisitions thus far have been less than one times revenue and, given that the company trades at more than two times revenue, creates immediate accretion for shareholders, even before cost and revenue synergies are attained by funneling new brands through its national DSD network.

At the same time, he underlined his excitement for New Age’s organic growth initiatives, which he said would help the company avoid spending its time and attention on raising money. He touted the robust R&D activity within Aspen Pure, a purified water enhanced with probiotics, that he said could generate “real scientific-based insights for real benefits for consumers.” Those innovations can also be attractive to retailers: Aspen Pure, for example, plays across the premium/fitness/lifestyle water categories, while Búcha Live kombucha now no longer requires refrigeration, opening up merchandising opportunities for the product outside of the crowded cold beverage coolers.

“That’s the trade-off,” he said. “Do you buy another company and spend time and money on integration, or do you drive literally the $100 million opportunities that you’re sitting on in terms of things you can expand organically, and take these good brands like Búcha, Coco Libre, Xing and Aspen Pure and fully penetrate and distribute them and build intangible assets. The toughest thing for me as CEO is resource allocation against the biggest opportunities.”

Right now, a significant portion of those resources — up to 10 percent of net sales, according to Willis — is being directed towards brand building and marketing efforts, a significant outlay compared to what New Age has spent historically. Having secured broader distribution, Willis said the company is now able to invest more in digital advertising and point-of-sale marketing for its key brands.

Size isn’t the only metric by which New Age aims to chart its success. Willis admitted that while the company was aiming to be the “best,” it was still in the process of defining what that means, though he said that offering the best return on investment for shareholders and the best earnings before interest, tax, depreciation and amortization (EBITDA) margin growth as “the very minimum” of the company’s expectations.

What he is adamant about, however, is his commitment to creating a strong, forward-thinking company culture built on performance analytics, organizational structure, and accountability. In order to achieve the objective of 40 percent gross margin within three years, having started at 22 percent, the company is evolving its operations; for example, each member of the sales team now has their performance tracked, ranked and published each week.

“Ultimately, culture trumps strategy every single time, which is why we spend so much time not just on the ‘what’ but on the ‘how’” he said. “Our model for culture is in people and the value, but also the processes of the system, the information and the environment of accountability, performance-oriented, metric-driven enterprise that we are trying to build. That requires wholesale change. It takes years.”

That sense of long-term dedication connects back with Willis’s marathon metaphor: having started quickly and seen positive early results, the test is now for New Age to maintain the mental edge and sharpness as it continues pushing towards bigger and better achievements, and Willis, a demanding self-evaluator, won’t let complacency set in without a fight.

“Honestly, there’s nothing that’s in our way but ourselves,” he said. “This is one of those things where ‘we’ve met the enemy and he is us.’ There’s nothing stopping us except for our own potential lack of vision or of execution. That’s why we are doing all the things at light speed.”