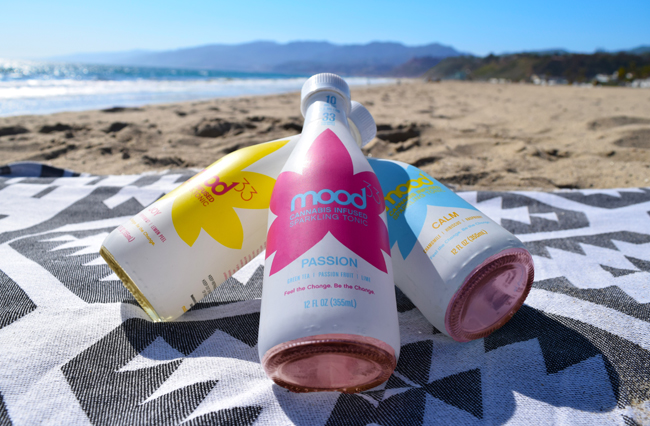 Eric Schnell says he doesn’t believe that “cannabis is a gateway to doing coke.” But he hopes that “one day Coke will be a gateway to cannabis.”

Schnell, co-founder of ready-to-drink tea brand Steaz, is looking to bring consumers one step closer to that potential future with his newest venture: Mood33, a cannabis-infused sparkling tonic. Developed under BeyondBrands, a beverage incubator and accelerator Schnell co-founded in 2016, Mood33 launched earlier this year with a party on April 20 and began selling in California dispensaries on June 1.

The project is led by 33 Brands Mgmt principal owner Michael Christopher. Speaking with BevNET this week, Christopher said the goal for the brand is to build a “next generation” cannabis-infused beverage line that can become a pioneering brand in the category.

Each Mood33 SKU contains 10mg of THC per 12 oz. bottle, which gives the consumer a 1-2 hour long “high,” which Schnell said was formulated to be mild enough that an individual can steadily drink two or three in a night. Flavors include Joy (Yerba Mate, Peppermint, and Lemon Peel), Passion (Green Tea, Passionfruit, Lime, and 2.5mg of CBD), and Calm (Chamomille, Hibiscus, Raspberry, and 5mg of CBD). Each single-serving bottle retails between $7.99-$8.99.

Christopher first began developing a non-psychoactive hemp-based beverage in 2015 with CBD-infused tonic brand Loft. However, federal regulatory issues and a lack of investors halted development, so when California and several other states voted to legalize recreational cannabis use in the 2016 U.S. elections, Christopher pivoted to developing a THC-based product.

“California passing their adult use legal framework was really the catalyst for us to pivot into a full THC-infused and CBD-infused line using a lot of the IPs that we had created under the CBD-only line,” Christopher said. “We thought it was a perfect match to combine the active ingredient with the California demographics, while also solving our market issues.”

According to Christopher, Mood33 will focus on servicing the 4,000 dispensaries currently operating in California, starting in Los Angeles and the Bay Area. By September, Christopher said the brand will be available in roughly 1,000 stores. This will prepare Mood33 for an eventual nationwide expansion as adult-use cannabis laws open up across the rest of the United States, he added. Because cannabis-infused drinks cannot be shipped across state lines — even to other states where recreational marijuana use is legal — Mood33 plans to eventually license its branding and formulations to manufacturers in other states, including Massachusetts and Colorado.

“We’re definitely in the right time frame for a social-use beverage with a lifestyle based experience similar to alcohol,” Christopher said. “In the medical market people want high-dose products for as cheap as possible, now we get to create an entirely different experience.”

Schnell said hopes to establish Mood33 as “the gold standard” for the recreational cannabis beverage category by the time cannabis is declared fully legal on a federal level, which he believes will occur within the next 10 years.

“We intend to be a leading pioneer, we intend to be in the top three brands in this space, and our vision is to be national and stay in the top three,” Schnell said. “It took us roughly 10 years to build out Steaz into a complete national brand…. We’ve got a lot of that experience, that knowhow, that vision we had in the early days of Steaz.”