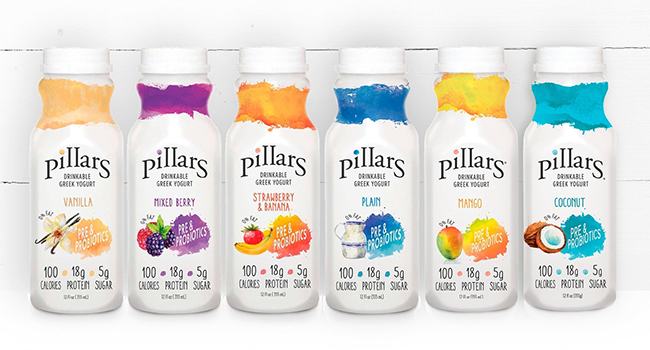 Most people can relate to Eric Bonin’s entrepreneurial a-ha moment. While driving to a business meeting in 2008, Bonin tried to maneuver traffic while eating a cup of Greek yogurt. You can probably guess what happened next.

Although that trip ended with his pants ruined, trying to solve the problem of portability led Bonin on an eight-year journey to develop Pillars Drinkable Greek Yogurt, a Massachusetts-based startup which launched in 2016. Bonin previously served as Manager of Strategic Initiatives at Commonwealth Dairy, a Vermont-based private label dairy producer, working alongside its CEO in all aspects of the business including milk sourcing, byproduct management, co-packing, and brand development. He left in 2014 to focus on Pillars fulltime.

Bonin initially landed placement for four Pillars flavors in his local Whole Foods in Framingham, Mass. and has since expanded the brand into the larger Whole Foods North Atlantic region. The brand is also available along the East Coast at retailers including Market Basket, Shop Rite and Hannafords and Bonin said he is now looking to grow the product line and expand the brand nationwide within the next 12 months.

“My goal for Pillars is to have the product everywhere you would see a lot of the larger mainstream brands,” Bonin told BevNET last week.

While traditional dairy milk is facing increased competition from plant-based alternatives, the market for drinkable yogurts is rising quickly thanks to entries by brands such as Chobani, Lifeway, and Siggi’s. In 2017, the global drinkable yogurt market was valued at $21.2 billion and is expected to grow at a double digit CAGR through 2023. In the U.S. alone, drinkable yogurt sales growth exceeded that of standard cup yogurt in 2016.

Pillars is seeking to position itself as a healthier alternative to many of the other drinkable yogurts on the market, promoting call outs such as no added sugars, grass-fed cows, and both prebiotics and probiotics. The line retails for an average $2.99 per 12 oz. bottle, and each SKU contains 100 calories, 18g of protein, and 5g of sugar. The current line includes Plain, Vanilla, Strawberry & Banana, Mixed Berry, Mango, and Coconut varieties and Bonin is currently working on developing about “a dozen” new flavors.

“A category like dairy is so hyper-competitive that the stuff you see out there wide-scale is just a few, large, major brands,” Bonin said. “For the most part it’s these major players who have millions and billions of dollars behind them promoting [the brand]. It starts with the product, and you really need to have a competitive product that truly is better than the others, and for us we compete on a really natural and simple ingredients list and a wholesome product.”

The brand will launch in Harris Teeter stores in the South on July 23, which will bring its total retail footprint to roughly 700 stores along the East Coast. Bonin said he is next targeting expanded distribution in the New York metro area, and that the brand has also received requests from on-premise accounts, including universities, hospitals, and restaurants.

Bonin is also meeting with investors as the operation has been self-funded to this point. As he prepares for national expansion, he said he is looking to grow his full time team and scale the brand.

The company is also preparing to launch a kids line later this year, something Bonin said has been requested repeatedly from parents who are seeking smaller pack sizes and child-oriented products. He hopes to use Pillars health and nutrition focused brand identity to create a drinkable yogurt line that competes with the sugary products currently prevalent in the market.

“A lot of the kids stuff out there now [for drinkable yogurts] has added sugar,” Bonin said. “It’s stuff I wouldn’t feed my kids. Well, I don’t have kids, but if I did I wouldn’t feed it to them.”