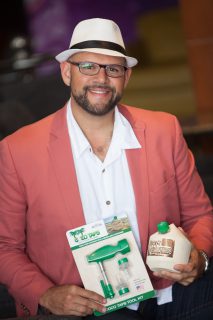 LAS VEGAS — Fresh-tapped coconut supplier Coco Taps announced today it will launch a Tap Back Rewards program to encourage the return of coconuts and plastic taps for reuse. The program will launch as a pilot in 2019 for Las Vegas business customers and is the next step toward reaching Coco Taps’ zero-waste goal. Coco Taps’ tapping and branding facility is the first in Las Vegas to earn the TRUE (Total Resource Use and Efficiency) Zero Waste certification.

The Coco Taps Toolkit provides an easy and safe system to tap fresh coconuts and provide an environmentally sustainable coconut water container. Coco Taps encourages the reuse and recycling of used tapped coconuts to reduce the waste stream to landfills. The company’s Coco Taps Tapping and Branding Facility is the first to earn a TRUE (Total Resource Use and Efficiency) Zero Waste certification in Las Vegas.Used coconuts are upcycled as planter pots. Coco Taps announced the launch of the Tap Back Rewards pilot program to encourage its customers to return their coconuts and plastic taps for recycling and reuse. Coco Taps customers will receive a credit for each used tapped coconut that is returned. The program will cut commercial waste costs for Coco Taps customers by decreasing the amount of material sent to landfill. Tap Back Rewards is the next step toward reaching Coco Taps’ zero-waste goal.

Coconut shells can be upcycled as plant pots or ground into mulch for use in school gardens and farms.

Since its launch in 2014, Coco Taps has worked toward becoming a zero-waste company. Drinking coconut water directly from the coconuts eliminates the need for paper, plastic, metal and glass containers that go to landfills. Coco Taps has reduced its packing materials, reuses its shipping boxes and promotes the use of non-plastic straws.

“The Tap Back Rewards program is a vital step toward Coco Taps becoming a regenerative business that gives more than it takes from the planet,” Coco Vinny, founder of Coco Taps, said.

“Coco Taps’ commitment to sustainability positions it as an environmental leader to inspire other businesses to become caretakers of our community,” Prigge said.

Founded in 2014, Coco Taps provides the only resealable coconut beverage system available in the market. Manufactured in the United States, tapping tool kits and coconuts are sold online through Coco Taps and resorts, retail stores and restaurants. The company recently launched an investment crowdfunding campaign here: https://wefunder.com/cocotaps. A contestant on the ABC reality series, Shark Tank, Coco Taps is headquartered in Las Vegas and is certified by the National Minority Supplier Development Council as a Minority Business Enterprise.