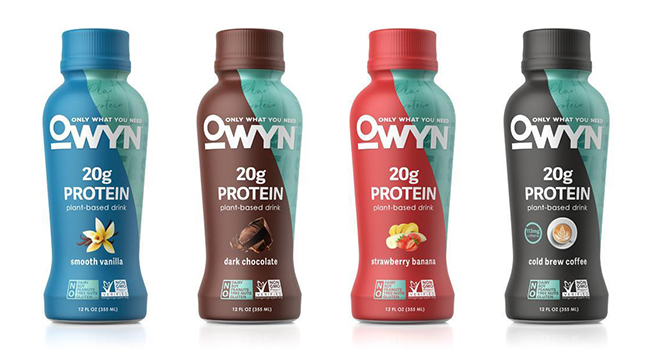 Approaching its first full year in the market, plant-based protein drink brand OWYN (Only What You Need) has added chainwide activations in Walgreens and Wegmans, as well as 2,500 CVS stores across the country. The company is now predicting it will triple retail placement to as many as 30,000 stores by the end of next year, according to Jason Cohen, founder and CEO of parent company Halen Brands.

Cohen and CMO Mark Olivieri told BevNET that OWYN has reached $10 million in sales during its first year, surpassing the company’s $1-2 million “proof of concept” goal by 2019. The brand has also seen growth in its e-commerce business, with an additional $5 million in online sales and a 35 percent repeat purchase rate.

OWYN currently has placement in Whole Foods’ Mid-Atlantic, North Atlantic, and Northeast regions and has been authorized for a global expansion in March. In recent weeks the brand has added placement in Walgreens stores nationwide, H-E-B, Duane Reed, and 2,500 CVS stores. The brand will launch chainwide in Wegmans next month in the retailer’s cooler set. The product is also available in Erewhon, Bristol Farms, Lazy Acres, Mothers, Jensen’s, and will expand its presence in existing Sprouts accounts at the next reset with additional SKUs.

OWYN’s distribution partners praised the brand’s development. Jerry Reda, COO of Big Geyser, which distributes OWYN in metro New York including 7-Eleven stores, told BevNET that he is “extremely excited about the placements and reorders we are receiving with OWYN.”

“We think it is the right product at the right time. The clean plant-based ingredients are what customers are looking for,” he said. “They are clearly opening the eyes of large national and regional retailers that sell a significant amount of protein drinks. Their taste profile has been highly complimented and we believe they have a bright future.”

Sean Nichols, VP of Sales at San Diego County distributor John Lenore and Company, which has carried OWYN for three months, told BevNET the brand has seen quick sales growth with “a lot of runway in front of it.”

“It’s still in the infancy stage as far as authorizations go, but from a DSD standpoint it’s a lot further ahead than most brands are three months in,” Nichols said. “Everybody we’ve talked to has been overwhelmingly impressed with it and the acceptance from retailers has been great.” 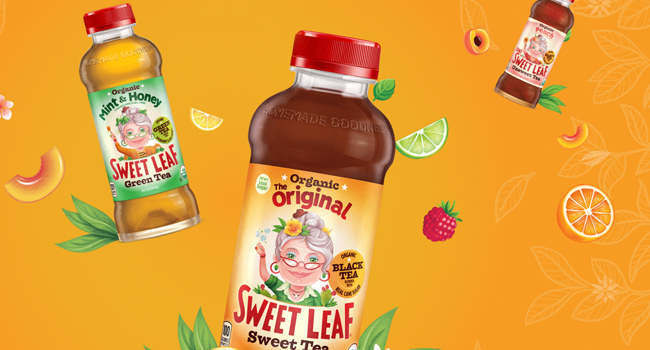 Dunn’s River Brands, a holding company with a beverage portfolio which formed last year in a partnership with private equity firm Fireman Capital Partners, acquired Sweet Leaf Tea in December from Nestlé Waters North America. The tea brand, founded in 1997, previously had limited distribution in the Northeast but its new leadership sees strong potential to grow in the region.

Speaking with BevNET yesterday, Dunn’s River Brands CEO Bill Meissner said the company has identified New York, the Northeast, and the Mid-Atlantic as a “tea corridor” where the category performs well but where Sweet Leaf has not penetrated.

“Leading with Big Geyser and New York first, the hope is for this to be the catalyst to grow Sweet Leaf throughout the region,” Meissner said.

Sweet Leaf recently redesigned its label to feature a “more healthy” looking version of its Grandma Mimi cartoon mascot and reformulated the product line to include organic Unsweetened, Semi-Sweetened, and full-calorie Sweetened varieties.

Big Geyser’s Reda told BevNET he wanted to work with the brand because he holds “tremendous respect for the Fireman family,” noting that Fireman Capital Partners has the drive and financial resources to build the brand.

“I’m not sure the Sweet Leaf name was that well known in the New York area outside of limited chain presence,” Reda said. “But when people taste it they emphatically state it is the best organic iced tea they have tasted. They have an innovative approach featuring unsweetened teas, semi sweet teas and sweeter teas. The reorders started coming in much sooner than we expected.”

In addition to Big Geyser, Meissner said Sweet Leaf is serviced by about 100 DSD distributors who were grandfathered in when the brand was acquired from Nestlé. The company is primarily focused on building the brand in the California, Mid-Atlantic and Florida, New York, Pacific Northwest, and Texas regions, and will focus on tapping DSD networks to drive the growth. 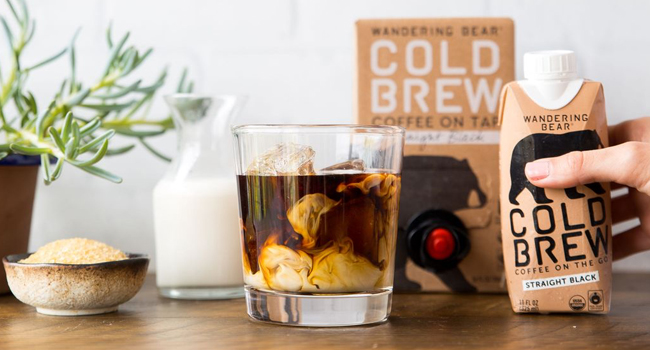 Wandering Bear Coffee announced today it has expanded its ready-to-drink line nationwide to more than 1,200 Target stores, building off of a regional test with the retailer. The brand will secure placement for three SKUs in the grab-and-go refrigerators located at Target Café’s in the front of each store.

“The thing we thought about Target for a long time is that for the product we had in there — which is a grab-and-go, single serve, ready-to-drink coffee — the grocery section was always a bit challenging,” co-founder Matt Bachmann told BevNET. “We know from some other retailers our multi-serves do very well as part of that basket build, but for Target in particular we were looking for other opportunities to build the brand.”

In addition to Target, the company has also added Kroger-owned Fred Meyer stores to its retail footprint.

Wandering Bear’s RTD line includes Straight Black, Mocha with a Splash of Coconut Milk, and Vanilla with a Splash of Coconut Milk varieties. All flavors come in 11 oz. Tetra Pak cartons and are sugar-free, dairy-free, and USDA organic certified. The line retails for $3.99 per carton. The company also makes a line of multi-serve bag-in-box coffees, sold in grocery and online, which include its Straight Black flavor and seasonal flavors. The company also services offices and food service accounts with its bag-in-box products and 5-gallon kegs.

According to Bachmann, the launch of the company’s RTD line has given both consumers and buyers an entry point to the brand, and has helped grow cross-category sales as grab-and-go trial increases, leading consumers to bring the multi-serve products into their homes and offices.

“For us in a lot of meetings now [with buyers], with the 11 oz. line, the conversation has really evolved in a positive way where we get to talk really credibly about our points of difference in the category aside just from packaging and brand and taste, which are really the things we’ve hung our hat on,” Bachmann said. “But the clean label and no sugar claims we’re able to make has really resonated with the buyers as they’ve started taking a category management view of cold brew and want to continue experimenting as the category grows. We feel with these accounts we’ve started to hit stride and find a home in the shopper basket.” 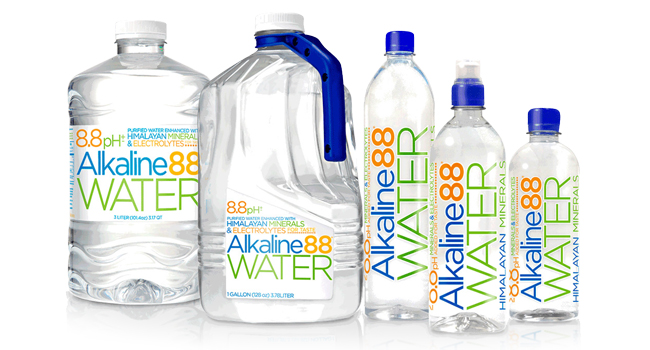 In a press release, the company said it has added accounts in “one of the largest drugstore/pharmaceutical chains in the U.S.” The expansion brings the brand’s U.S. distribution to more than 47,500 stores. The release did not specify the retailer.

“This is a significant achievement for the Company and firmly secures Alkaline88’s place as a true national brand,” said Richard A. Wright, president and CEO, in the release. “We believe that our other sales efforts towards the remaining classes of trade, including big box retailers, club stores, convenience stores, and e-commerce, will be met with similar success. I would like to thank the hardworking Alkaline88 team and our nationwide broker network that made this possible.”

According to the release, the expansion also opens the door for Alkaline88’s recently announced alkaline water infused with hemp-derived cannabidiol (CBD). Wright noted that the product will launch “once all approvals have been obtained” from regulators.