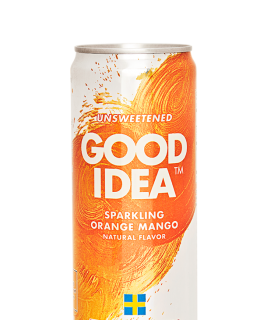 SAN FRANCISCO — Good Idea, the Swedish Sugar Buster notably known for helping a healthy person handle the sugar spike following a carb-rich meal has made its way to the NorCal region and is now securing placement at a growing number of retailers. The company GoodIdea Inc, originally from Sweden and now located in San Francisco is excited to have a growing footprint in a community that’s comprised of health conscientious people who are observant of what they eat and drink.

Most people would perceive Good Idea as just another flavored sparkling water, but the fact is that it is far from that. The “supplement facts” on the backside of the can reveal a proprietary blend of five amino acids and chromium, clinically proven to help the body handle the blood sugar spike following an ordinary meal rich in fast carbs. Good Idea is the result of years of research and development conducted by Good Idea Inc´s Swedish mother company Aventure AB and the Food for Health Science Centre at Lund University in southern Sweden.

“We´re on a mission to bring health to the table,” said GoodIdea Inc´s CEO Björn Öste. “Many of the meals we eat, like burgers, pizzas, fries and even sushi contain fast carbs that turn into sugar in the blood vessels. In the long run this puts a strain on the body, and adding soda makes the problem even worse. We see a trend coming, where people replace their sugary drinks with water, and adding the functionality of Good Idea, we are at the forefront.”

GoodIdea Inc. CEO Björn Öste is also part of the team that brought another Swedish success into the US. New York´s latest dairy trend, Oatly Oat milk is spreading across the country as a prairie fire, with thousands of café´s literally throwing out the old non-dairies, replacing them with Oatly.

“Oatly is, just as Good Idea, a result of multidisciplinary research, and understanding of market needs,” said Öste. “The point of departure for Good Idea was research showing that a blend of five specific amino acids could reduce the post-meal blood sugar spike substantially. When a hint of chromium was added, repeated clinical studies showed that the reduction was an impressive 20-30%, and we realized that we were on to something really exciting. Years of studies and product development later, Good Idea was ready for launch, and the US is our first market”

So, what is a blood sugar spike, and how can it be recognized? Öste takes an ordinary lunch, and what happens after as an example.

“When you have a carb-rich meal for lunch, you will feel almost instantly energized, just to fall into the afternoon slump shortly after. What happens is that the blood sugar spikes, and then drops again like a stone. You feel drowsy, and if you give in to the cravings for something sweet, it is all on repeat. Unfortunately this all too common eating pattern poses a severe threat to your health and is one of the foremost risk factors behind obesity, type 2 diabetes and cardiovascular disease.”

The roll-out in NorCal is currently covering around 25 stores and growing by the day. According to Öste, the area was an obvious choice, since it is densely populated by health consentious people who are early adopters of products with true functionality and promote a sustainable lifestyle.

“And sustainability is all we are about, all the way from promoting healthy and sustainable eating habits, to the choice of packaging material,” said Öste. “With recent studies showing that more than 90% of tested water brands contain microplastics, consumers are seeking alternatives to buying water in plastic bottles. We consciously chose aluminum cans instead – a 100% recyclable material leaving the content absolutely free from any contamination.”

Good Idea Inc. is the US subsidiary of Swedish food & biotech company Aventure AB. Good Idea – the Swedish Sugar Buster is available in the company webshop (www.goodideadrinks.com), on Amazon and shortly (spring 2018) at various retailers across the US. Currently the company is working with KeHE and major nationwide distributors. In addition, to traditional retailers and grocery chains Good Idea Inc. is working closely with corporate wellness centers, nutritionists and other leading health care professionals to make the Swedish Sugar Buster available in retail and food service.