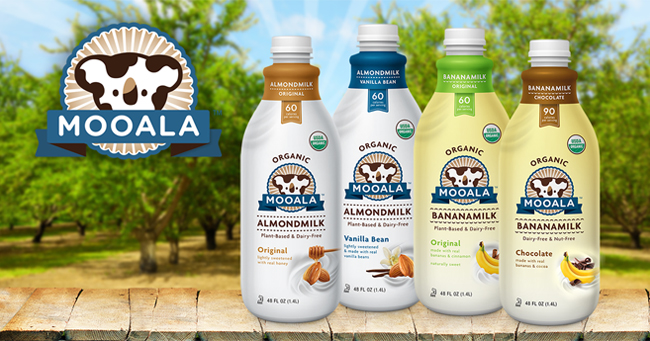 Before he had finalized his first products, Jeff Richards knew his startup would be named Mooala.

As the founder and CEO, Richards designed the first iteration of Mooala’s logo, featuring a friendly koala character, himself, in Microsoft Powerpoint.

Richards had come from a background in finance and had previously made venture capital investments into food and beverage brands, but was now preparing to enter the industry himself with a line of almond and banana milk products based on recipes he made in his own kitchen after being diagnosed as lactose intolerant. He felt that a welcoming and broad brand identity would give him versatility for his first entrepreneurial entry into the CPG space.

“That character [the koala] has the family friendly branding appeal that was missing and is still missing in the market,” he told BevNET. “There’s not a lot of character in the dairy aisle.”

Mooala launched in 2016, and has since gained distribution through UNFI and placement in more than 1,500 stores, primarily focused in the Southwest close to the company’s Texas base, but with retailers in the Midwest and Northeast as well. In January, the company completed a $5 million series seed round, led by M3 Ventures and Sweat Equities, which provided working capital to cover the brand’s early growth.

Speaking to BevNET this month, Richards said the brand has doubled its distribution since the funding round closed, and is now looking to quadruple in size in 2018.

Mooala currently offers a line of four 48 oz. milk alternatives, including Original Almondmilk, Vanilla Bean Almondmilk, Original Bananamilk, and Chocolate Bananamilk. In the fast growing dairy alternative category, which reached more than $2.11 billion in 2017, according to Mintel, Richards sees opportunity to stand out by offering an organic product and a family-friendly approach to marketing and pricing. The brand currently retails for about $5.99 per bottle.

“The almond milk business is a crowded space but one we’re having success in,” Richards said. “And I think that what’s needed is a product line that has real ingredients, is clean label and can still hit a price point that’s good for every family.”

According to Richards, Mooala’s banana milks are its biggest sales driver, calling it the brand’s “secret sauce,” something he attributes to being a nut free option for consumers seeking dairy alternatives.

“I think our brand is really strongly positioned to be multi-faceted,” Richards said. “It translates well not just into milks, but other categories as well. Being able to bring something that is nut-free and dairy-free to consumers answers a lot of problems for a lot of families, so we’re focusing our product development and marketing efforts in such a way that we’re creating products to serve a generation that has the most dietary restrictions and ailments in modern history.”

But before breaking outside of beverage, Mooala is working on a single serve line set to launch later this year, an innovation Richards hopes will help drive trial. Having only larger SKUs, he said, has made it difficult to market as it creates logistical challenges while sampling. “You can’t go throw people 48 oz. bottles of milk at a music festival,” he said.

Although sampling has sometimes proved difficult for the company, Richards added that demand has been high. The company briefly ran out of stock earlier this year, although they have since replenished and taken measures to avoid a repeat outage.

Currently, Mooala is available in two regions of Whole Foods Market and sales in the natural channel are strong, but Richards said he hopes to avoid being boxed into any one retail chanel. Mooala has launched in box and club store like CostCo, and grocery including Wegmans, Stop & Shop, and Safeway where the goal is to have a more mainstream audience. Although he hopes to add ecommerce options, Richards said the focus currently is on brick-and-mortar, but that he’s open to exploring online and direct-to-consumer opportunities.

“When you come back to the core we’re serving families that have dietary restrictions,” he said. “Every new market we get in we’re reaching a new family that can really use our products.”