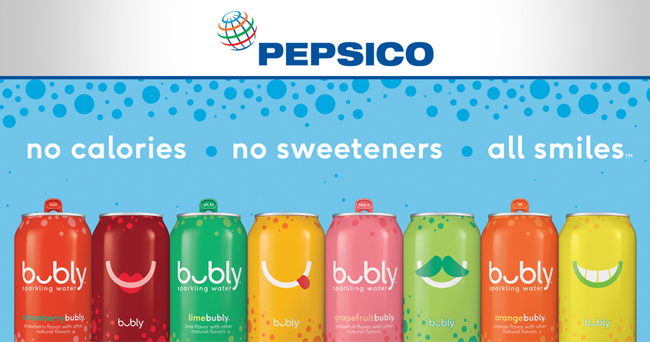 Earlier today, the CPG giant officially announced the launch of Bubly, an eight-SKU line of fruit-flavored sparkling water in 12 oz. cans that will debut at retail this month.

“When we looked at the sparkling water category, we saw an opportunity to innovate from within by building a new brand and product from the ground up to meet consumer needs,” said Todd Kaplan, Vice President, Water Portfolio – PepsiCo North America Beverages, in a press release. “We created bubly to provide consumers with a great-tasting, flavorful, unsweetened sparkling water in a fun, playful, and relevant manner that is unlike anything we’ve seen in the sparkling water category today.”

Bubly will be available in eight flavors: lime, grapefruit, strawberry, lemon, orange, apple, mango and cherry. The brand’s “fun, playful” side is reflected its bright color scheme and irreverent personal messages on each can (“hold cans with me,” for example). The zero-calorie line is free from artificial flavors and sweeteners.

The line will be sold in 8-packs and 12-packs, with a suggested retail price of $3.89 and $4.99, respectively. A 20 oz. plastic bottle, made from 100 percent recycled materials, will retail for $1.39. Bubly will debut in stores and via online retailers Amazon and Walmart starting at the end of February.

In an email to BevNET, representatives of PepsiCo said the launch of bubly would not have an impact on the availability of the company’s other 12 oz. flavored sparkling water offering, Aquafina Sparkling.

PepsiCo will give the brand a splashy debut next month with a pair of 30-second television ads slated to air during the 90th Academy Awards broadcast on March 4.

As carbonated soft drink sales continue to fall in the face of consumers concerns about sugar, Bubly represents another step in PepsiCo’s pivot towards a more balanced brand portfolio. In 2016, the company announced that by 2025 at least two-thirds of its drink products will have 100 calories or fewer from added sugar per 12 oz. serving by 2025.