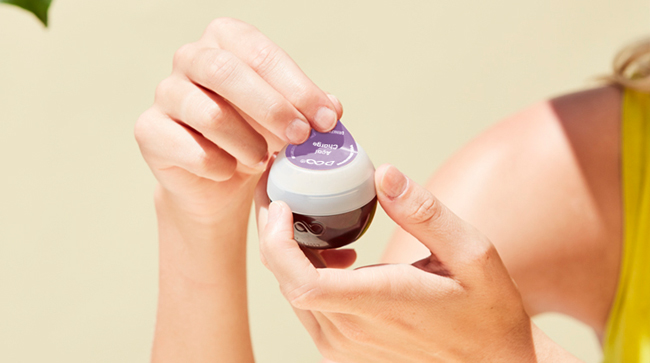 Drinkfinity is a beverage system featuring a line of water-enhancer flavor pods designed to be used with a specialized plastic water bottle called a “Vessel.” Each pod contains different functional flavors which consumers can mix with water to “Peel, Pop and Shake,” according to the company, to create customized, better-for-you beverages. The pods are inserted in a special cap on the vessel which releases the contents into the liquid when squeezed.

The pods currently come in a variety of 12 fruit-based flavors operating in one of four functional “modes,” including Charge, made with green coffee extract; Flow, which includes vitamins C and E; Renew, containing electrolytes for workouts; and Chill, for relaxation with botanicals. The line currently features flavors across the four modes, including Mandarin Orange Charge, Lemon Spirulina Flow, Coconut Water Watermelon Renew, and White Peach Chill.

The pods contain about 2 oz. of liquid each, along with dry ingredients, and are all natural. Each pod ranges from 30 to 80 calories.

Speaking to BevNET, Rich Rodriguez, U.S. director of Drinkfinity at PepsiCo, said the different modes can ensure that Drinkfinity can be used any time of day, throughout the day.

“We realized consumers have an interest in preparing their own beverages, so this is a convenient way for them to be able to do this,” Rodriguez said.

Speaking to BevNET, Rodriguez said the need for Drinkfinity comes as consumers have increasingly embraced personalized beverages. He noted that cafe chains such as Starbucks and smoothie bars have given consumers increasingly greater control over their beverages, and Drinkfinity offers a similar experience via a CPG product. Customizable beverages have also for years been a popular consumer trend for at-home gadgets, such as Sodastream and Keurig. Companies including Kraft and Coca-Cola have also in the past released liquid water enhancers, and independent brands such as Dyla Brands’ Stur have sought to seize on consumers’ need for a better-for-you water mixer.

Drinkfinity, however, adds the visceral experience of “popping” the pod and mixing the drink, which Rodriguez said is a major selling point. The portability of the pods and versatility of the vessel as a standard water bottle also help give the line a unique identity. 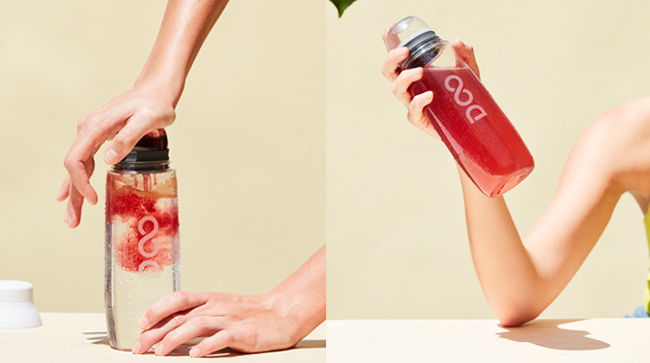 Drinkfinity also includes a sustainability play, as the reusable bottle and small size of the pods reduce plastic usage by 65 percent when compared to ready-to-drink products, Rodriguez said. Consumers have the option to mail used pods back to PepsiCo for recycling with postage-paid envelopes.

The American Drinkfinity line varies from the Brazilian version, which was designed and launched in the country in 2014. According to Rodriguez, the new flavors are tailored to the American palate and the sugar content has been toned down in order to match health trends.

“We’ve done a fair amount of testing to make sure that it’s on-trend,” Rodriguez said. “The Brazilian product is very sweet and bold in flavor, and we believe that what makes more sense in the U.S. is the portfolio we’re coming out with that we communicate as ‘unapologetically less sweet.’”

Rodriguez said PepsiCo is exploring other channels for Drinkfinity, but the product currently is only available through Drinkfinity.com. The 20 oz. vessel is available for $20 and the pods sell in packs of four and vary in price between $5 and $6.50. Drinkfinity is also offering a subscription model, which is priced at a 10 percent discount.