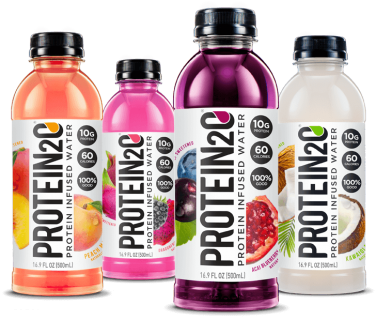 CHICAGO — Protein2o has experienced tremendous growth recently with increasing demand for its low-calorie protein water across a strong list of existing retail partners, as well as the addition of national distribution at Walmart, Target, Speedway and Publix. The company recently tapped experienced CFO Brian Douglas to lead the finance function as Protein2o prepares for further rapid growth and expanding strategic relationships.

Brian brings to the company both recent entrepreneurial experience as well as deep finance and transaction talent honed across roles at leading financial institutions. “In the last year, Protein2o sales have tripled and growth continues to accelerate. We needed someone with sharp financial acumen as well as someone who knows and can drive the pace of an early-stage, high-potential business,” said CEO and Founder Bob Kral. “Brian’s background is exactly what we need at the perfect time, and I couldn’t be more excited to have him join our team.”

Brian will work closely with the existing management team and the Board of Directors chaired by former Gatorade President Sue Wellington. He will be tasked with planning the company’s near-term growth and longer-term aspirations. Included in his responsibilities will be a heavy focus on business analytics and optimization as well as guiding ongoing discussions with investors and strategic partners.

“Protein2o is one of those rare early-stage companies that has it all: the leading product in a new class of beverages with massive potential, a talented management and investor team with decades of relevant experience, and a culture built on innovation and excellence,” said Douglas. “I’m looking forward to helping shape the future of the company and doing what I can to drive successes big and small. The next eighteen months will be very exciting given the advances the company is already preparing for.”

Brian has held three CFO positions of high-growth start-ups in New York following six years in the investment banking industry. At Goldman Sachs, he rose to the Vice President level while serving financial institutions such as insurance and financial technology companies. Prior to business school, Brian held investment analyst roles at two financial firms. He received degrees from the University of California at Berkeley and the University of Iowa and has earned the CFA designation. Brian and his family reside in New York City, and he will spend much of his time at the company’s Elk Grove Village, IL (Chicago) headquarters.

Founded in 2013 by former SVP of Merchandising for Walgreens and GNC Bob Kral and his son Robert Kral, a former Johnson and Johnson sales executive, Protein2o is the original and #1 protein water in America (Nielsen). Protein2o comes in nine flavors with 10-15 grams of whey protein isolate and only 60 calories per 16.9 oz. bottle. Protein2o is owned by a group of beverage, finance and retail industry leaders.