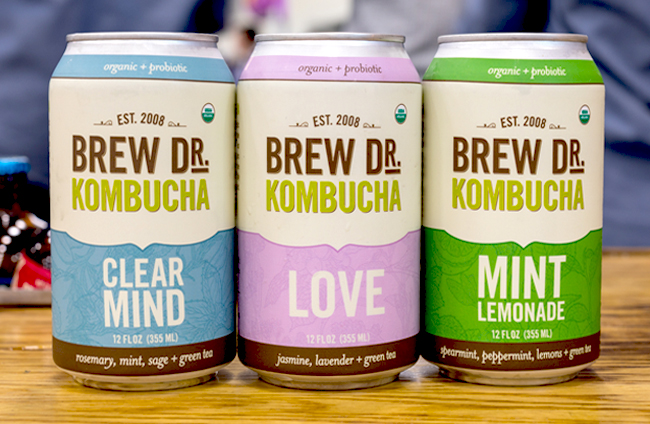 Over the last decade, kombucha has developed as a category primarily in glass bottles.

Over the next decade, cans may help it take the next step.

As kombucha continues to penetrate mainstream retailers, brewers are exploring new ways to capture a larger share of the expanding set and create differentiation within it. Following the example of craft beer, they are increasingly looking to cans as a way to realize kombucha’s full potential.

The glass bottle format has been good to kombucha. Brands that use custom molds, such as Health-Ade, Brew Dr. and Humm, have helped natural retailers build out their kombucha sets with products that communicate high quality and health through their packaging, further distinguishing those drinks as better-for-you alternatives to soda.

Yet kombucha makers are increasingly taking their cue from the craft beer space, where in recent years brewers have embraced the can format as a convenient and portable option for consumers.

“Really with how well craft beer has crossed over into cans in the last three to four years, it kind of took the conception of a can as a less craft option and removed that,” said Matt Thomas, founder and CEO of Brew Dr. Kombucha. The brand will be launching three SKUs in 4-packs of 12 oz. cans exclusively at Whole Foods nationwide starting in June. “There is wine in cans now as well,” he continued. “It’s made it something where from a marketing standpoint and from a perception standpoint, we felt like the time was right for cans.”

Trey Lockerbie, founder of Los Angeles-based Better Booch, had been interested in producing canned kombucha since the early days of the company, but resisted the idea until this year when it launched four flavors in 16 oz. single cans which are available exclusively at Whole Foods in Southern California through the end of April. He explained that the delay was partly due to the company’s limitations as it scaled, but also because of hesitation on how the product would be received. 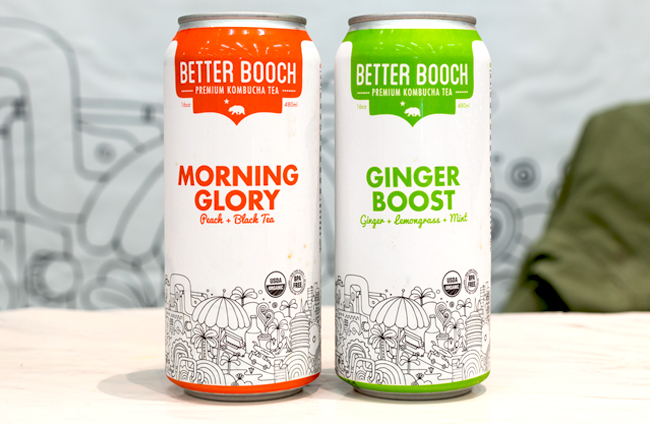 “We consider ourselves a premium kombucha product — sometimes a can have a connotation of cheaper and not as premium.” he said. “The premium message is why we launched with glass. We got a lot more confident once we saw more premium beer brands adopting cans. They are just better in every way and we’re Better Booch, so we have to adopt the better way.”

In founding Bellingham, Wash.-based Kombucha Town, which has been sold exclusively in cans and on draft since its launch, Chris McCoy was motivated to use the package for environmental reasons. According to trade group The Aluminum Association, cans typically contain 70 percent recycled material. Consumers also recycle cans 20 percent more often than they do glass.

Cans also weigh less and require less packing material, which reduces the carbon footprint required to transport the product. Finally, they are more portable than bottles, which McCoy envisions as playing a role in positioning his company as more of an active lifestyle brand with appeal to conscious consumers.

“I do see value in what a lot of other brands are doing with custom bottles and creating that perception of value,” said McCoy. “That’s kind of an old school marketing technique in my opinion. It’s ‘let’s take a product and make it look nice.’ I consider us on the leading edge of the second generation of kombucha companies, where it’s much more about what’s in the package. For me, I wanted to build brand more around our environmental values, in terms of packaging and formulation.” 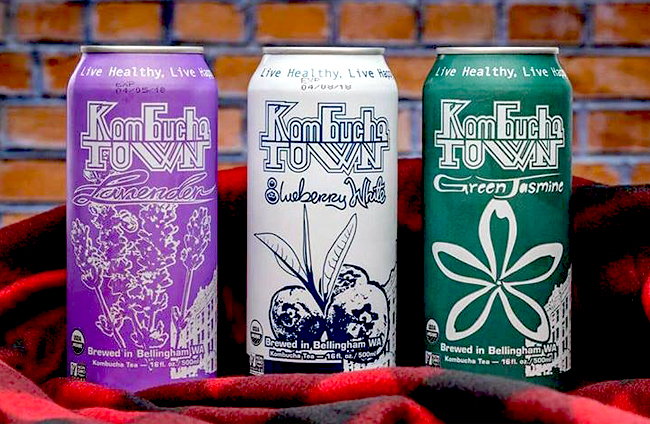 Cans also provide a bigger canvas for brands to create a strong visual identity. Thomas said he wanted to retain the minimalist aesthetic of Brew Dr.’s bottles on the cans; with the additional space, the company was able to tweak the layout — putting the flavor in larger text, adding some copy on the company to the back — without overcrowding it. “It was refreshing to have that much room to work with,” he said.

For Lockerbie, having a second package format to experiment with has been creatively liberating. “We love the flexibility of having both [bottles and cans],” said Lockerbie. “It keeps our continuous development creative and fun because there’s all kinds of fun new packaging ideas you can do with the can.”

Perhaps most importantly for the category as whole, cans have the potential to introduce kombucha to new consumers in new retail channels at a lower price point.

“As kombucha does keep expanding, it can become more affordable and that will help us get to more of the country,” said Lockerbie. Better Booch has a suggested retail price of $2.99 for a can; bottles are around $3.99.

“People don’t think about bringing a 12-pack of kombucha to a party, but if I bring one, it’s gone in an hour,” he said. “You don’t do that with bottles. For some reason it’s the tactile experience of the can; people are used to sessioning cans and I think that the perceived value element is deterred a little bit based on some conventional marketing wisdom.”

Thomas said Brew Dr. views its 4-packs of cans as a way to further penetrate the natural and conventional channels.

“Just as you saw 64 and 32 oz. bottles [of kombucha] go into the [cooler] well, you could see this in the well, stacked two high,” he said. “Or it could fit easily on the shelf as well. We also put a lot of our own fridges in retailers, which could be half cans and half bottles.” 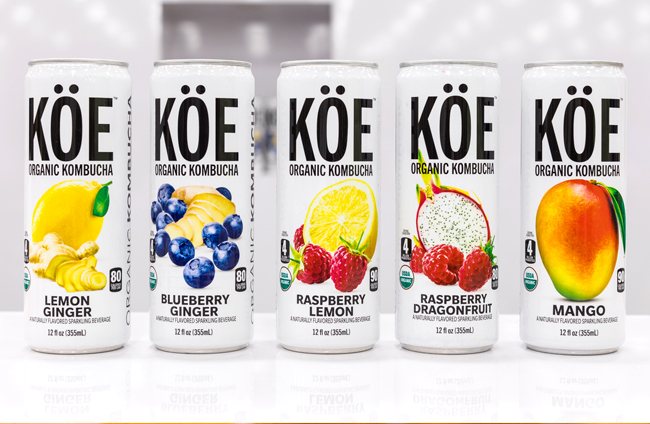 With the recent spate of activity around canned kombucha, why hasn’t the shift happened sooner? To some degree, it has: Kombucha Wonder Drink has long sold a pasteurized version of the drink in 8.4 oz. slim cans, and recently launched a prebiotic kombucha in cans last month, A handful of smaller brands, such as Wunder-Pilz and Bucha Buena, also market canned products. This summer, a new brand, Koe, will launch a shelf-stable kombucha in 12 oz. slim cans.

“I think it’s just part of the natural evolution of the category,” said Lockerbie of the recent uptick in canned kombucha. “As more people become familiar and comfortable with kombucha, myths get busted and something like a can starts to make more sense.”

If that evolution continues, it’s unlikely these brands will be alone in taking advantage of the can format.

“Just having the can as a selling point isn’t really that great; it’s great that you are the first but no one is ever the first for very long,” said McCoy.