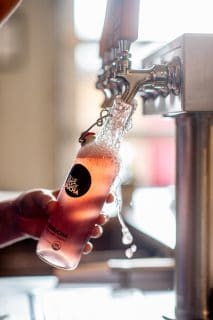 WAYNESBORO, Va.– Since 2010, Blue Ridge Bucha has been handcrafting organic kombucha in the Blue Ridge Mountains of Virginia and offering it on draft throughout the Mid-Atlantic region so that customers can refill their bottles instead of recycling or throwing them away. Over time, this shared effort has made a tangible impact: as of September 2019, Blue Ridge Bucha drinkers have saved over one million bottles through their commitment to refilling.

“It’s becoming so clear in this era of climate change that the small choices we make each day matter–and one million bottles saved is an awesome example of how a mighty ocean is made up of many small drops,” says co-founder Ethan Zuckerman.“Remembering to bring bottles back isn’t always easy, but like reusing grocery bags or refusing single-use plastics, it’s a small step that makes a cumulative difference. If you line up all one million of the 12 ounce bottles we’ve saved from end to end, they would make a path long enough to hike from our brewery and taproom in Waynesboro to the Chesapeake Bay, to the Washington Monument, or to the top of Old Rag Mountain and back!”

“This milestone feels really meaningful for us and our team,” adds Ethan’s wife and Co-Founder Kate Zuckerman. “If someone had told us when we founded our company that this collective environmental stewardship would eventually result in a million bottles saved, it would have been hard to believe. But after being inspired by our customers coming back to refill again and again, this feels like the natural result of a shared long-term commitment to living in a more sustainable way.”