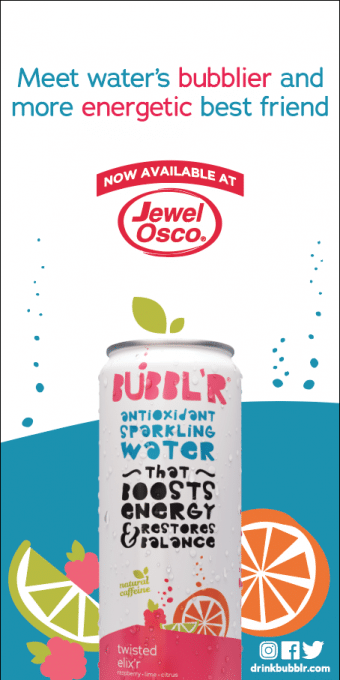 BUBBL’R, water’s bubblier and more energetic best friend, is continuing to dominate in a new niche within the already red hot sparkling water category. Following its exciting launch in 2017, BUBBL’R continues to grow with strong VPO’s and newly secured distribution in numerous retailers. The category-creating brand has landed on the shelves of three Kroger Divisions in the spring of 2019, adding 270 new locations to its rapidly growing footprint. Utilizing its predominantly upper-Midwest distribution network through the independent Pepsi system, BUBBL’R has begun landing on the radar of national accounts as the brand has begun to build market share at a pace that cannot be ignored.

Beginning at the end of April, BUBBL’R will become a major player in the Chicago market with Jewel becoming the latest retailer to partner with the brand. All 187 locations will launch six flavors of BUBBL’R on the retailer’s shelves, with a major media push to drive consumer awareness of the brand through out-of-home and radio advertising. BUBBL’R also recently gained distribution at Dierbergs and other leading retailers in the St. Louis market through Grey Eagle and the Budweiser network, giving the brand an even stronger presence in the Midwest.

BUBBL’R has been able to accomplish all of this by filling two major consumer needs. CSD drinkers who have been looking to transition to sparkling water are often put off by the lack of taste, which BUBBL’R solves through its proprietary non-artificial sweetener blend. The end result is a sparkling water with a much more accessible taste that still has zero sugar and just five calories per can. On the other end of the spectrum, dedicated sparkling water drinkers can turn to BUBBL’R as a guilt-free, health-conscious energy option with its natural caffeine sourced from white tea extract and compliment of antioxidants and vitamins.

If you are looking for BUBBL’R in your area, the store locator will help you find retailers near you. And if BUBBL’R hasn’t reached your market yet, BUBBL’R is also available on Amazon and Staples.