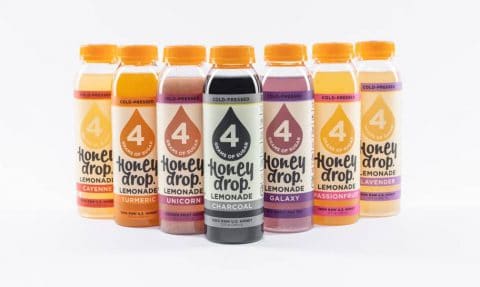 BROOKLYN, N.Y.– Honeydrop, the leading producer of cold-pressed, low sugar lemonades, is excited to announce a new distribution partnership across Texas with FullClip Craft Distributors. Additionally, the company has partnered with new retail chains including Giant/Martin’s & The Fresh Market.

“With summer in full swing we could not be more excited to expand Honeydrop’s distribution across the great state of Texas. FullClip has deep relationships within the Houston, Austin, San Antonio & DFW markets; We are thrilled to distribute our full portfolio to brand new retailers and refresh Texas consumers alike,” said Andrew Lorig, CMO, Honeydrop Beverages.

Honeydrop’s Turmeric, Galaxy and Unicorn lemonades can also now be found throughout The Fresh Market’s locations, spanning across 22 states nationwide. Additionally, Honeydrop has partnered with Giant/Martin’s to have their Turmeric and Lavender skus included in the chain’s all new paleo set, scheduled to be rolled out this summer in 85 of their locations across the Mid-Atlantic region.

With the lemonade category forecasted to grow at 6% CAGR over the next few years but still dominated by highly processed and high sugar brands, Honeydrop’s cold pressed products bucks the trend by providing retailers a healthy lemonade that is never heated, contains a few simple ingredients and has only 4g of sugar per bottle.

For further information about distributing or selling these products please visit www.honeydrop.com or contact the team at hello@honeydrop.com

Honeydrop is a line of cold-pressed raw honey lemonades that contain just a teaspoon of raw honey.  A Paleo friendly beverage, Honeydrop’s ingredients, which include raw honey and supercharged antimicrobial Manuka honey, are of the highest integrity and minimally processed to preserve their amazing health benefits and flavor. Honeydrop also donates proceeds to to battle Colony Collapse Disorder (CCD), an epidemic threatening the global bee population. Honeydrop’s line of beverages can currently be found at leading retailers across the country. Honeydrop also makes ordering and delivery easy with a simple online ordering system and direct delivery service, including national shipping. For more information and to order online, visit: www.honeydrop.com. Consumers with a personal buzz can learn more at www.honeydrop.com or email: hello@honeydrop.com. Also, follow Honeydrop on Facebook: facebook.com/Honeydropbev and Instagram: @Honeydrop.