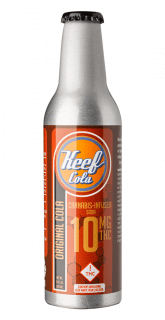 OAKLAND, Calif.– The next evolution of drinking with friends has arrived in the Golden State! Keef Brands, a leading developer, producer and distributor of cannabis-infused beverages, edibles, concentrates and more, has launched its award-winning portfolio of cannabis-infused sodas, Keef Cola, in Northern California. Keef Cola reflects a revolutionary wave of social consumption, as the quality of taste-making sodas are poised to attract savvy cannabis consumers, while the approachable flavors reminiscent of soda fountain staples also welcome the canna-curious to pop the cap and take a sip.

First introduced nearly a decade ago in Boulder, CO, Keef Cola is made with high-quality CO2 cannabis extract and pure cane sugar. Each 12-fluid ounce bottle contains 10 milligrams of THC, along with vitamins C, B3, B6, and B12. Five bold and refreshing flavors will be available at select dispensaries throughout Northern California for responsible adult-use. What sets the nutrient filled product apart is its fast-acting effects and the ability to bring people together and make social connections while enjoying infused beverages. Keef Cola will also launch in Southern California later this summer.

“We’re thrilled to be back in the California marketplace,” said CEO Erik Knutson, who in 2010 with his brother Kelly Knutson co-founded Keef Brands as one of the first companies to infuse soda with cannabis. “Connecting with California consumers, both the canna-curious and experienced enthusiasts, helps us further our mission to strengthen a positive cannabis culture and community. By offering another way to consume cannabis in the form of high-grade beverage products, we are able to complement social, positive and healthy lifestyles.”

A recognized leader in the cannabis space known for its track record of innovation, taste and consistent quality, Keef Brands develops, produces, and distributes multiple cannabis-infused product lines including Keef Cola, Keef Shots, Keef Sparkling, Keef Life, Keef Stix, Keef Pax Pods and Keef Carts. This diverse and carefully curated product portfolio continues to be an award-winning brand, most recently winning the Westword 2019 Best in Denver Readers’ Choice for Best Edible Company. Founded in Boulder, CO, the company has been at the forefront of innovation around social cannabis product development and education since 2010. Keef Brands products are currently available at more than 800 retail locations across the United States, as well as in Puerto Rico and Jamaica. Follow Keef Brands on Instagram and Facebook.