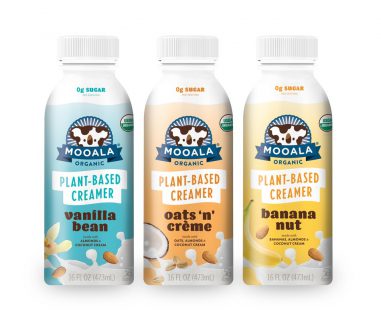 DALLAS, Texas— People watching their sugar and dairy intake or those looking to eat cleanly have a new reason to wake up in the morning with a smile, thanks to Mooala, a leading maker of plant-based, organic beverages at a family-friendly price point. The company known for its scrumptious Organic Bananamilk and Almondmilk varieties, announced the launch of a delicious line of organic, plant-based creamers made with a base of coconut cream and almonds with no added sugars. This tasty, plant-based composition doesn’t separate when mixed with hot coffee, making Mooala a standout in the crowded creamer market. What’s more, they come in industry-first flavors like Banana Nut and Oats ‘n’ Crème, which are made with real bananas and oats, and beautifully whiten any cup of joe.

“Crafting delicious, organic, plant-based beverages is in our DNA, so introducing Mooala Creamers to the marketplace was a fun and logical evolution for our brand,” stated Mooala Founder and CEO Jeff Richards. “Our fun recipes are organic, unsweetened and plant-based, which really sets us apart from the competition. They’re great options for consumers who are lactose intolerant, embracing a healthier lifestyle, or just want a tasty way to join in on the plant-based movement.”

Like all the company’s products, the new Mooala Creamers are USDA organic, dairy-free, gluten-free, carrageenan-free and non-GMO. They are available in three fun flavors:

According to Richards, at an MSRP of $3.99 per bottle, Mooala Creamers are rapidly disrupting the marketplace, providing great value for consumers and gaining strong traction in retail. He explained, “We’re answering a growing need because, until now, the majority of plant-based options included added sugar and were merely non-GMO, which is not enough anymore. Our Creamers are USDA organic, which requires non-GMO ingredients but also maintains strict environmental and sustainability requirements.”

Initially, Mooala Creamers have launched inCentral Market and The Fresh Market, and will be sold in Wegmans, ShopRite, Giant Martin and Earth Fare later this summer.

Mooala Creamers are part of the fastest growing segment of the overall plant-based market, with the creamer segment experiencing over 100 percent year-over-year growth during 2018, according to Nielsen. They join the brand’s line of organic plant-based beverages, including Original Almondmilk, Vanilla Bean Almondmilk, Original Bananamilk, Chocolate Bananamilk, Strawberry Bananamilk and most recently, Coconut Oatmilk.

Mooala offers families with dietary restrictions, allergies or those striving to make simple better-for-you lifestyle swaps the ability to enjoy a variety of tasty plant-based options guilt-free. Its beverages are available in over 2,000 retailers nationwide, including Whole Foods Market, Wegmans, ShopRite, Albertsons-Safeway, Giant, Kroger and more. To learn more about Mooala, please visit mooala.com, become a fan on Facebook or follow us on Instagram, Pinterest, and Twitter.

Based in Dallas, Tex., Mooala is a leading maker of premium, organic, dairy-free beverages made from real ingredients. Since its founding in 2016, the company has become widely esteemed for its full suite of USDA-certified organic and family friendly, dairy-free beverages, and best known for its breakthrough Original Bananamilk variety, the industry’s first organic, nut-free, dairy-free, and soy-free Bananamilk. For more information, visit mooala.com.