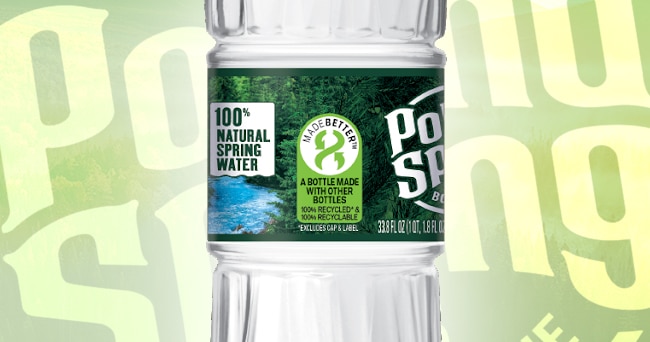 In its effort to remove the “single” from single-use plastic, Poland Spring today announced it has begun transitioning to recycled plastic (rPET) packaging across its still water portfolio, with the goal of reaching 100% rPET use by 2022.

The announcement comes after the brand’s parent company Nestlé Waters North America announced in December its intention to reach 25% rPET across its U.S. portfolio by 2021, and 50% rPET by 2025.

“In order to achieve our 25% content, we’re leading with Poland Springs,” said David Tulauskas, VP and chief sustainability officer at Nestlé Waters. “It’s a major brand, it’s well known and we think it will have the best opportunity to inform, educate and inspire consumers and even municipalities and policy makers about the importance of this. Rather than putting a little bit of rPET in a lot of different products all over the place, we’re taking a brand-by-brand approach.”

Tulauskas also noted that Arrowhead, Nestlé Water’s California-based regional brand, has been using 50% rPET in its packaging for the last few years. Nestlé Waters is currently using approximately 7% rPET in its packaging, and is set to nearly quadruple this number by the end of 2021. ORIGIN, Poland Spring’s new premium offering, launched in 100% rPET 900 mL bottles last month, with the brand’s 1 liter rPET bottles are set to be introduced this month.

Tulauskas said making the switch to rPET has been challenging in ways, requiring the company to establish closer relationships with its suppliers. Nestlé announced late last year its expanded relationship with its key supplier Plastrec as well as its partnership with rPET supplier CarbonLITE.

“This is not business as usual,” he said. “Whether you look at it from insuring a constant supply of it, or even finding where the supply is located, locating suppliers and making sure that you’ve got the logistics in the supply chain in place to make sure that we can run reliably with 25%, 50%, or in the case of Poland Spring, 100% rPET, it has really required us to approach our business differently.”

While Tulauskas said the implementation of rPET will continue to pose a challenge, he said it is a necessary step to change consumers’ approach to plastic bottle disposal and keep plastic out of landfills and oceans.

According to a report by the Ellen MacArthur Foundation, an organization aimed at establishing a circular economy, most plastic packaging is single-use and accounts for $80-120 billion lost to the economy annually.

“Plastic is a valuable resource, and I think what’s been lost in the narrative is that when 100 billion dollars annually of plastic are just used once, that’s a really staggering, inefficient use of resources,” said Tulauskas.

Tulauskas noted that while many beverage companies have made varying commitments to use more rPET or have chosen alternative packaging solutions, Poland Spring is the first major bottled water brand to bring to the market nationally distributed, 100% recycled bottles.

Several bottled water companies have made strides to increase sustainability outside of Poland Spring. In January 2018 Evian announced it will shift to 100% rPET bottles by 2025. At the time, the brand claimed its bottles across its portfolio were composed of 25% rPET. The Coca-Cola Company announced in December its investment in PET upcycling technology, along with its goal to create packaging made of at least 50% recycled material by 2030. Elsewhere, Massachusetts-based spring water brand Native Water utilizes 100% rPET for its bottles.

Consumers may not notice a difference between the PET and rPET packaging, according to Tulauskas, besides the addition of the 100% rPET labels and standardized How2Recycle labels across all of its packaging to inform consumers about what to do with the bottle once they’re finished. He said a main concern for Nestlé Waters is giving consumers confidence that the bottles they put in recycling bins will actually be recycled. This confidence could help increase the U.S. recycling rate, which was about 34 percent in 2015, according to the EPA.

As part of this effort, the company has partnered with community improvement organization Keep America Beautiful as well as Closed Loop Fund, investing $6 million in the fund’s efforts to strengthen recycling infrastructure. Coca-Cola has also awarded grants to Closed Loop Fund.

These moves are part of what Tulauskas calls Nestlé Waters’ “holistic, integrated” approach aimed at changing the way suppliers, retailers and consumers think about plastic packaging.