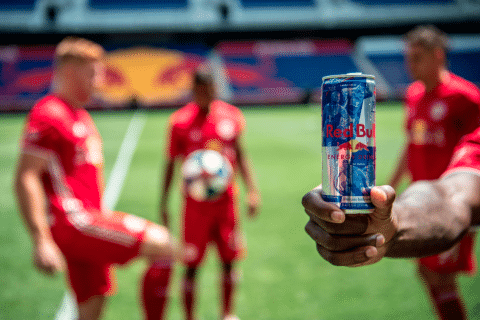 NEW YORK– Have you ever wished you could spend a day with players on your favorite Major League Soccer Team, the New York Red Bulls? In celebration of the launch of this year’s new, limited edition Red Bull New York Red Bulls Can, one lucky fan has a chance to win the opportunity to do just that.

Fans can compete for their chance at the ultimate RBNY experience by designing a custom cheer card, the ultimate expression of team loyalty, passion and support. At redbull.com/supporters* fans can design their card combining personal photos, epic stickers and custom messages.

The winner will experience what it’s like to be a Red Bulls player – an all-access soccer experience most fans dream of. On day one, they will join drills, have lunch with the team, sit through media interviews, and watch team scrimmages up close. On game day, they’ll watch the game from the coveted manager’s box seats, right behind the player benches. Runners up (12) will enjoy four tickets to a New York Red Bulls match, Red Bulls merchandise, and their cheer cards will be displayed on the jumbotron at the Red Bull Arena.

“Our fan base remains the lifeblood of the club and their passion inspires our organization each and every day,” said Marc de Grandpre, General Manager, New York Red Bulls. “The ultimate player experience winner will be granted the unique opportunity to prepare for a match as if they were a member of the team. We are thrilled that this once in a lifetime experience will coincide with four of our players being part of the limited edition can.”

Along with the can’s release, Red Bull is also launching a social video featuring each of the players on the can, reflecting on what drives them and reminiscing their iconic moments.

Red Bull is available in over 170 countries worldwide and more than 6.8 billion cans of Red Bull were consumed last year, two billion of those in the U.S. alone. An 8.4 fl. oz. Red Bull contains 80 mg of caffeine, equivalent to a home-brewed cup of coffee. For more information, visit energydrink-us.redbull.com.

The New York Red Bulls are one of 24 teams in Major League Soccer (MLS). They are one of the ten charter clubs of MLS, having competed in the league since its founding in 1996. They currently play home matches at Red Bull Arena (RBA) in Harrison, New Jersey. RBA, a state-of-the-art, 25,000-seat stadium, is widely regarded as the top soccer-specific stadium in North America. The club is owned by the Austrian beverage company Red Bull GmbH for which the team is named.

*No Purchase necessary to enter or win. Contest is open July 1, 2019 through September 30, 2019 at 11:59 ET. The contest is open to legal residents of the states of New York, Connecticut, and New Jersey who (i) reside within 75 miles of Red Bull Arena, located at 600 Cape May St., Harrison, New Jersey 07029, throughout the entire Contest Period; and (ii) are at least 18 years old and the age of majority in their jurisdictions of residence as of the date of entry.  Void where prohibited. Full rules available at RedBull.com/Supporters.