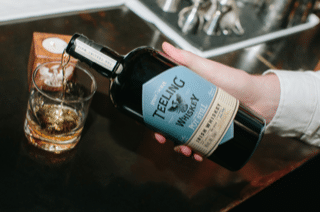 NEW YORK— Teeling Whiskey is proud to launch their two newest expressions just in time for the holiday season– the Single Pot Still and Single Cask Whiskey. On the heels of their record-breaking win for the 24 Year Old, named World’s Best Single Malt at the 2019 World WhiskiesAwards, Teeling is continuing to make waves in the category and breathe new life into Irish whiskey with these two new products.

Teeling’s new Single Pot Still is the first whiskey distilled in Dublin in nearly 50 years, serving as a symbol of Irish Whiskey’s recent revival, kick-started by founders, Jack and Stephen Teeling. This expression is crafted using a uniquely Irish mash bill consisting of malted and unmalted barley, paying homage to a famous Dublin style while forging a new path in the single pot still category.

“The release of our own Dublin distilled whiskey completes the revival of craft distilling in Dublin and draws us into a new renaissance, not only for Teeling Whiskey but also for Dublin distilled Irish whiskey as a whole,” said Jack Teeling, Founder & Managing Director.

With innovation and creative distilling techniques on the forefront, Teeling is also launching their new, limited-release Single Cask that is available exclusively to the US market. Hyper-limited to only 846 total bottles available only in New York, California and Illinois, this unique expression boasts an understated flavor and robust natural character.

As with all Teeling Whiskey, the new Single Pot Still and Single Cask are finished with Jack Teeling’s signature on the labels as the final sign of approval. Both expressions will be available onReserveBar.com and fine liquor stores.

About The Teeling Whiskey Company

Looking for Breweries for Sale