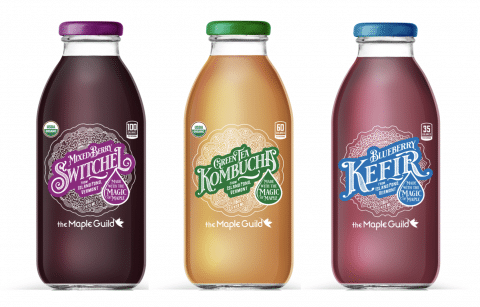 The Maple Guild’s gut-healthy beverages are anticipated at retailers in select markets, as well as the brand’s direct-to-consumer online shop, this summer.

The company – steward of a 16,000-acre sugar maple forest and production facility in northern Vermont – has been re-imagining maple since the brand entered the market in 2016 with its award-winning Steam-crafted syrups. This state-of-the-art process, which put The Maple Guild on the foodie map, involves indirectly heating maple sap tapped from its own trees via steam instead of direct heat. The result is a smoother, more delicate flavor when compared to the burnt, caramelized taste of typical syrup. In the past two years, The Maple Guild has added a maple spread, vinegar, teas and enhanced waters to its expanding portfolio.

In the 17th century, switchels became a popular drink for farmers at hay-harvest time in the American colonies. Starting with ice-cold well water and vinegar, the drink (sometimes called a haymaker) was finished with molasses or maple syrup. The Maple Guild enters this recently rediscovered beverage category with its Mixed Berry Switchel, using its own Maple Vinegar instead of harsh apple cider vinegar. The Maple Guild’s Maple Vinegar starts with maple sap naturally aged in California wine barrels. Organic summer berries from the Northeast add new flavor to this effervescent beverage of true American heritage.

With 19th century roots in Russia, Kefir is traditionally a dairy-based drink using sugar for fermentation. The Maple Guild’s Blueberry Kefir, instead, is fruit-based and dairy-free, using the brand’s Steam Crafted Grade A Maple Syrup in place of sugar. This results in a beverage with a lower-glycemic index and packed with antioxidants, b-vitamins, minerals and flavonoids from tapt. Blueberry, one of The Maple Guild’s own maple-sweetened, enhanced waters.

Kombucha, the ever-popular fermented tea drink of Chinese origins dating back centuries, is typically made using generous amounts of refined white table sugar for fermentation. Instead of sugar, The Maple Guild ferments organic, non-GMO, fair-trade green tea from India with its own Steam-Crafted Grade A Maple Syrup. This delivers a more subtle taste, lower glycemic index and increased nutrients.

At Natural Products Expo West, the brand will sample, for the first time, its new probiotic drinks as well as its core line of six syrups and three new syrup infusions: Orange Cardamom, Coffee and Mixed Berry. The brand will also showcase its previously-launched specialty items like its Maple Vinegar, Maple Butter and its maple-sweetened teas and enhanced tapt. waters.

The Maple Guild – steward of the world’s largest “sugar bush” or sugar maple forest – has been rapidly expanding product offerings and retail distribution since it began tapping its trees in Vermont’s storied Northeast Kingdom just four years ago. In the past year, it doubled production while reducing its carbon footprint, due in part to its energy-efficient Steam- Crafted process and a newly-installed dual evaporation system.

About the Maple Guild

The Maple Guild, which launched in 2016, has become the largest single-source producer of organic maple syrup in the world. Its mission: to produce the purest, highest-quality maple syrup and maple-based products on the market by managing every part of the process from Tree-To-Table. Overseeing 16,000 acres of sugar bush in northern Vermont – with an 1,800-mile network of tap lines – The Maple Guild produces its syrup through a reverse-osmosis and Steam-Crafted process. This allows The Maple Guild to go from sap to syrup in less than 90 seconds, resulting in a smaller carbon footprint by volume than its competitors, less processing, higher yields and a purer maple-flavor profile. Beyond syrup, the company also prides itself on continually innovating new ways to bring maple to the world. Visit mapleguild.com and follow The Maple Guild on Twitter and Instagram @TheMapleGuild.