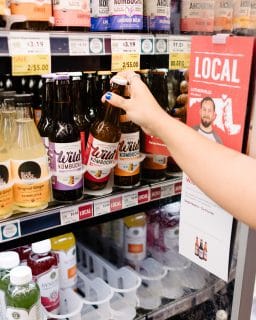 Kombucha, a fermented tea, has been shown to have gut-health benefits as a potential source of probiotics and antioxidants.

“We are so excited to be able to offer our kombucha to a growing number of consumers in the Mid-Atlantic region,” said Sid Sharma, who started Wild Kombucha in 2015 with fellow co-founders Adam Bufano and Sergio Malarin. “With our variety of kombucha flavors, infused with natural juices, there’s a Wild Kombucha for everyone.”

The company has experienced rapid growth in the five years since its founding, when the three friends would get together after work and make Bufano’s urban spin on a family recipe at a small rented room in a juice shop. Since then, the company has expanded to a 13,000-square-foot brewery, where it employs 19 people and produces around 10,000 bottles and 50 kegs per week. Wild Kombucha has grown 466 percent in the last three years, and its products can be found in six states and Washington, D.C. in stores such as Harris Teeter, MOM’s Organic Market and Sprouts Farmers Market. With the addition of Whole Foods stores in Ohio and Kentucky, Wild Kombucha will now be available in eight states.

As the company has grown, it has also stepped up community giving efforts. Wild Kombucha donates 1% of total sales to the Chesapeake Bay Foundation.

“Being a homegrown Baltimore company, we wanted to make sure that as we grew, we remained good community members,” said Bufano, “and we couldn’t think of a better way to do that than to help protect the iconic Chesapeake Bay and all the wildlife it supports.”