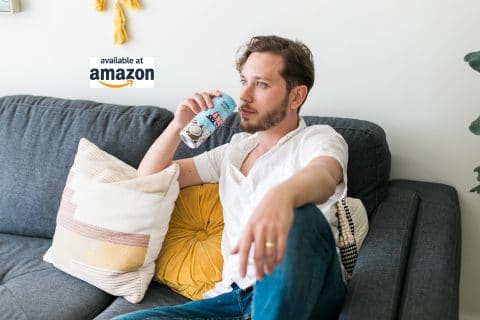 The company website pairs Angry Seltzer with “people who love the bite of soda, but don’t want the calories.” And it’s fair to say Angry Seltzer has taken a bite right out of the soda water market from the jump, selling out of almost everything in the opening weeks before replenishing Amazon’s virtual shelves in early May.

Many attribute the success to Amazon’s “virtual cart”, where checking out 10-15 cases of hardcore seltzer creates no backache whatsoever. Direct-to-consumer refreshment has never been this easy.

Angry Seltzer was founded by two best friends in Miami who wanted the crazy-bubbly assault of carbonated drinks without the worries. Thus, they set about repurposing some of nature’s more obscure offerings, known as “fruit”, and created a zero-calorie fired-up-water-experience that literally beats the bull out of their consumers’ thirst. The beverages contain zero sodium and zero sugar, allowing for all-day, guilt-free consumption.

This “full flavor, full refreshment” philosophy helped push Angry Seltzer’s founders to dive deeply into their own psyches and embark on a Steve Jobs-esque Product Discovery Session, dreaming up the first craft flavors at a laboratory in Laguna Beach, CA. There, in that effervescent state, they witnessed the birth of “Cranky Coconut”, a flavor modeled after a beachgoer with sand in their bathing suit, and “Litigious Lime”, a term first coined to describe your future ex-wife.

After more tastings and samplings than a Sunday at Costco, the founders distilled the essence of refreshment into a series of wildly delicious flavors. So popular with kids and adults alike, they’ve had to drill deep into Middle East seltzer pits and bribe pirate vessels to bring barrels of “Resentful Raspberry” and “Grumpy Grapefruit” ashore in the dead of night to satiate your explosive demand. Economists predict that in the future, dystopian queues at the gas station won’t be for cars trying to fill up on gas, but for drivers trying to fill up on Angry Seltzer.