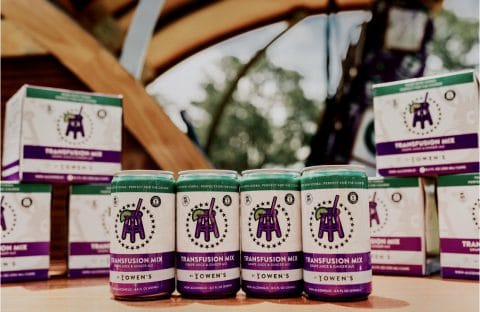 NEW YORK – Barstool Sports is announcing its latest co-branded beverage partner, Owen’s Craft Mixers with a new non-alcoholic cocktail mixer, The Barstool Transfusion Mix By Owen’s. Owen’s Craft Mixers is the presenting partner of the Fore Play podcast and is the official cocktail mixer of Barstool Sports. This summer, Barstool and Owen’s are joining forces to deliver the Transfusion, a delicious co-branded mixer designed for enjoyment on the golf course or your home bar.

The Barstool Transfusion Mix By Owen’s is 8.5 oz, lightly carbonated and made with pure cane sugar, real grape juice and natural flavors. The blend of real grape juice and ginger ale makes the perfect transfusion just by adding vodka.As the official cocktail mixer of Barstool Sports’ Fore Play, Owen’s Craft Mixers has been a favorite of the Barstool Classic’s Commissioner Riggs for years. The time was ripe upon the return of the tournament for Riggs and the Fore Play podcast to pair their golf game with their very own Transfusion, a cocktail synonymous with golf. Barstool Sports and Fore Play took their own spin on the classic golf drink with Owen’s Craft Mixers as they continue to grow in the CPG space.

“Barstool is heading straight to the moon and we are so excited to be part of the journey.” Josh Miller, co-founder and President of Owen’s Craft Mixers said about working with Barstool. “Working with Riggs and the Fore Play team to bring the Transfusion Mix to market is a great example of two innovative companies working on a project they are passionate about and we couldn’t be happier with the result.”

“The transfusion has been my go-to golf drink for years. The only problem with it was that it could be a bit of a pain to make. Thanks to our partners at Owen’s we’ve made it easy, we’ve made it delicious, and we’ve done it with a REALLY sexy can.” – Riggs, Commissioner of The Barstool Classic & Co-Host of The Fore Play Podcast.

“We’re excited to announce our very own Barstool Transfusion with Owen’s Craft Mixers as we continue to expand in the CPG space. Owen’s was a natural fit as our official partner of Fore Play, the number one golf podcast by common golfers, for common golfers.” – Erika Nardini, CEO of Barstool Sports.

Pre-sale for The Barstool Transfusion Mix By Owen’s begins June 24th exclusively on store.barstoolsports.com/ and owensmixers.com/shopnow. Official launch and distribution of four packs, as well as availability in retail stores nationwide, begins July 8th. Follow along at @foreplaypod and @barstoolsports for more updates and announcements with @owensmixers heading into our July launch.