The food and beverage industry continues to step up and lend support to those in need during the COVID-19 pandemic. In this roundup, we highlight brands’ efforts to give back, including Rowdy Mermaid’s donations to local Colorado nonprofits and Susosu Water’s efforts to support young and single mothers in the Washington, D.C. area. 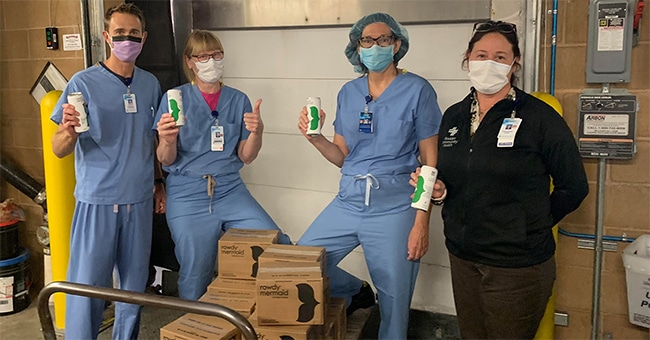 Boulder, Colorado-based kombucha brand Rowdy Mermaid is giving back to local hospitals and nonprofits during the pandemic, with a goal to donate at least 1,000 cases to organizations in need throughout the area.

Dziuban said the brand has also connected with local nonprofit organizations such as Denver Inner City Parish, Denver’s Community Food Share (which partners with Feeding America) and We Don’t Waste, an organization that collects excess food from venues, caterers, restaurants and other local food and beverage companies and redistributes it to underserved communities in the Denver area. She said that busy food banks receiving an influx of donations connected her to other local organizations like Denver Inner City Parish, which then in turn directed her to We Don’t Waste.

“It’s really cool to connect with the community and see how close-knit they all are,” she said.

The brand is also in discussion with local school districts to donate products, and has at this time allocated less than half of its 1,000 cases for donation and is seeking additional nonprofits partners in need in the area. Dziuban said that while the brand had hoped to make donations to homeless shelters, they are not accepting donations of kombucha due to the small percentage of alcohol typically found in kombucha products.

Because Rowdy Mermaid does not currently have an e-commerce platform — though Dziuban said it is currently in development — the brand has partnered with two local wholesale and foodservice distribution companies who have themselves pivoted their businesses due to the pandemic. Wholesale distributor Solis moved online during the pandemic and now offers products from Colorado-based brands to consumers for 50% off, while restaurant ingredient provider Atlamira has now opened its warehouse to the public for home delivery. Solis is also offering local brands like Upstart Kombucha and coconut water maker CocoRidge, while Atlamira also offers Denver-based tea soda brand Teatulia.

“We’re all human and we’re all in this together and we’re not just trying to sell a product and make money, we’re trying to solve a problem and help people,” Dziuban said. 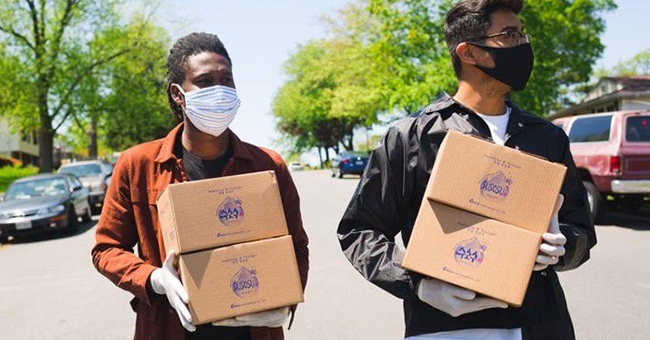 Virginia-based mineral water brand Susosu Water has partnered with Empowered Mums, a local nonprofit focused on supporting young and single mothers, on its new “For Mums We Stand” campaign. Susosu Water will donate product and a portion of its profits to the campaign, which delivers groceries and other necessities to mothers impacted by the pandemic in the Washington D.C. area in association with nonprofits VirusCure and Hearts of Empowerment.

Susosu Water co-founder and CEO Jheen Oh said he was already familiar with Empowered Mums founder Amy Montoya, who is a loyal customer of the brand.

“I saw her post on LinkedIn about her nonprofit organization and immediately had to reach out as I really believed in her vision and mission and what she was doing it for,” he said.

Susosu Water has donated cases of water to be distributed to local mothers in the area, and is also donating 10% of its e-commerce sales to the cause. Oh said the campaign officially launched on Mother’s Day and has since received an “outpour of support” as the organization has been able to donate to mothers in Washington, D.C, Virginia and Maryland. Those in need of support can fill out an application at empoweredmums.org/for-mums-we-stand, where monetary donations to the campaign are also being accepted.

Dairy company Borden has been awarded a contract with the U.S. Department of Agriculture’s (USDA) Farmers to Families Food Box Program, which is part of its Coronavirus Farm Assistance Program (CFAP), according to a press release. Through the CFAP, the USDA is purchasing and distributing $3 million worth of agricultural products, including milk, produce and meat, while also working with local and regional distributors who have been affected by the closure of restaurants, hotels and other foodservice operations.

“Borden applauds the USDA for taking this monumental step to ensure that Americans have convenient access to nutrition during this difficult time in our nation’s history,” said Borden CEO Tony Sarsam in the release. “This USDA contract allows Borden to exponentially grow our coronavirus relief efforts that are already underway. The 3,300 people of Borden are incredibly proud to further support our communities and eager to begin fulfilling more donation requests immediately.”

Other dairy companies donating milk to several regions through the program include Illinois’ Prairie Farms.

Other Good News From Around the Industry:

Meet the Right People to Push Your Business Forward

Supercharge Growth and Scale is Available For Replay

Taste Radio: What Does It Take To Go From ‘Good’ To Great? Consider Your Audience.