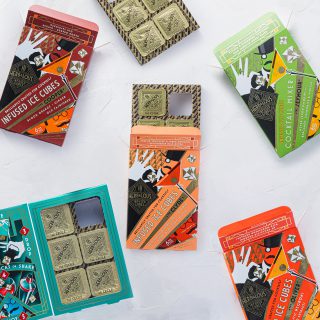 BLUE BELL, Pa.– Herb & Lou’s, LLC. – makers of Infused Cubes non-alcoholic cocktail mixers and innovators in the world of mixology – is proud to announce the appointment of Owen Rothstein into the newly formed position of Vice President of Operations & Strategy. Rothstein has been involved with Herb & Lou’s since their early days, consulting on product formulation and brand creation and now formalizes his role as a lead executive with the team. He comes to Herb & Lou’s with 20+ years of consumer product sales, marketing and product development experience. Rothstein’s key responsibilities as Vice President of Operations & Strategy at Herb & Lou’s will be to expand infrastructure, develop new product offerings and drive brand expansion through strategic partnerships.

Launching his career in consumer products with Plume Ridge Import/Export, Rothstein joined Drew Estate Cigars in 1997 and helped develop the brands that put them on the map during the cigar boom in the late 1990’s. His development of the company’s identity, as well as creation of their breakthrough product Acid Cigars helped propel the company to international success and recognition as trendsetters within the industry. Rothstein later developed his technical skills leading four departments at Multi-Flow Industries, including R&D and Marketing. Rothstein, a trained sommelier, learned beverage formulation while at Multi-Flow, utilizing his experienced palate to greatly increase Multi-Flow’s offerings and help them expand into the C-Store market. Most recently, Rothstein lead the formation of consumer health brand swiig for Simple Again. The creation of swiig unified the many disparate product lines previously offered through the company’s B2B division into a cohesive brand housing 100+ SKUs, driving growth in the CPG space.

Reid Rosenthal, Co-Founder and Herb’s grandson said “It’s exciting to watch our company grow. We’ve been searching for additional talent and I believe at this stage of our development, Owen will be invaluable. It’s great to have him on board full time.”  John Wolgamot, Sales Director with Herb & Lou’s and a beverage industry veteran that joined Herb & Lou’s at the beginning of this year, added “as the unprecedented growth in spirits and premium mixers continues, Herb & Lou’s continues to expand its reach into additional channels of trade. Additionally, Herb & Lou’s premium non-alcoholic products are expanding into DSD partnerships as distributors have recognized Herb & Lou’s as a new-found source of volume and revenue that does not conflict with any current portfolio pairings. It’ll be great to have Owen to help build the business.”

Founded by Herb & Lou’s grandsons to bring their passion for cocktails to a new generation, Herb & Lou’s Mixology is at an exciting point in their evolution – since revolutionizing the at-home cocktails experience in 2015. They’ve enjoyed recognition as winners of Nightclub & Bar “Entrepreneurs of the Year” and have been lauded by In-Style and Oprah Magazines, along with many others.

Herb & Lou’s now offers five selections of Infused Cubes – non-alcoholic cocktail mixers that, once frozen, flavor a single serving of one’s favorite liquor for a perfect cocktail. The product line includes The Cooper (for bourbon/rye), The Clyde (for vodka), The Cecile (for tequila), The Oliver (for gin) and The Seymour (for rum). Herb & Lou’s Infused Cubes have been crafted to pair with your favorite spirit, but can also be combined with seltzers, teas, and other beverages to create easily configured premium mocktails. (see more details at herbandlous.com).

All five Herb & Lou’s Infused Cubes flavors are made here in the U.S. and are now available in both 12 packs and 6 packs, both online at herbandlous.com and nationwide at retailers like Crate & Barrel, Neiman Marcus and Nordstrom. The in-store retail footprint continues to expand in the grocery and liquor stores channels.