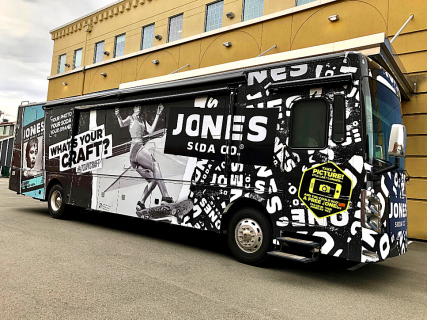 SEATTLE– Jones Soda Co., the original craft soda known for its unconventional flavors and user-generated label artwork, is asking people to share the craft that inspires them every day for a chance to be featured on Jones Soda labels across North America. The company is launching a campaign called “It’s My Craft” by reuniting with Tony Hawk, a legend known for his mastery of the skateboarding craft who was one of Jones’ first sponsored athletes.

The campaign reflects Jones Soda’s belief that everyone has a unique skill that energizes them and forms an integral part of their identity. Despite pandemic restricting activities, people are finding creative ways to continue pursuing their craft, and the #ItsMyCraft theme is offering an opportunity to celebrate that enthusiasm for personal expression.

“It’s great to be reunited with Jones Soda because they share the same passion in pursuing excellence in one’s craft.” Hawk said. “I believe our respective fans appreciate craft just as much.”

The campaign hit the road earlier this month in a fully wrapped Jones-branded RV carrying Hawk and his family on a 10-day tour with stops that included a bison ranch, various national parks, and multiple skateparks. Along the way, Hawk created photo and video content showcasing his family’s adventures that will be featured on both Hawk’s and Jones’ social media channels.

The #ItsMyCraft RV will continue to celebrate craft with stops throughout the summer in select markets highlighting local talent and offering samples of Jones’ own craft, including trademark quirky flavors such as Fufu Berry, Blue Bubblegum and the recently launched Watermelon.

The partnership between Hawk and Jones Soda also includes support for Hawk’s “The Skatepark Project” (formerly the Tony Hawk Foundation), which helps finance public skateparks in low-income communities. As part of the agreement, Jones Soda has made a substantial donation to support Hawk’s philanthropic efforts.

“2021 will mark Jones’ 25th year as the original craft soda. We’re kicking off the celebration by applauding the many forms that craft can take starting with one of the most recognizable athletes in the world. Tony has 15 million followers on social media. Even people who aren’t skateboarders know who he is and love him,” said Jamie Colbourne, Jones Soda’s newly appointed CEO. “With Tony in our camp, a graphically in-your-face RV serving as a moving billboard for the brand, and the #ItsMyCraft campaign creating major visibility, we’re staking our claim as a brand that has a lot of air in the best skateboarding sense of the term.”

Headquartered in Seattle, Washington, Jones Soda Co.® (OTCQB: JSDA) markets and distributes premium beverages under the Jones® Soda and Lemoncocco® brands. A leader in the premium soda category, Jones Soda is made with pure cane sugar and other high-quality ingredients, and is known for packaging that incorporates ever-changing photos sent in from its consumers. Jones’ diverse product line offers something for everyone – pure cane sugar soda, zero-calorie soda and Lemoncocco non-carbonated premium refreshment. Jones is sold across North America in glass bottles, cans and on fountain through traditional beverage outlets, restaurants and alternative accounts. For more information, visit www.jonessoda.com or www.myjones.com or www.drinklemoncocco.com.

After more than 30 years of building a global brand ranging from apparel, toys, events, endorsements, social media, film production and one of the most successful video game franchises ever, legendary pro-skateboarder Tony Hawk remains one of the most popular athletes in the world. Hawk’s foundation, The Skatepark Project, helps finance public skateparks in low-income areas across the USA and other parts of the world. And he still skates regularly.