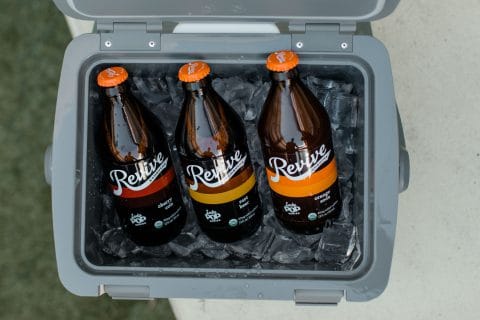 “We wanted to bring kombucha back to the future, so we took our favorite flavors from when we were kids and turned them into the radically raw kombucha Revive is known for,” says co-founder Sean Lovett.

Each brew of the ReviveSoda Pop Series features 40mg of natural caffeine derived from green tea, ensuring your experience is as close to what you remember as possible. Cola is not new to Revive, as their Original Cola was the first and only beverage they brewed for their first three years and is still their best seller today. The lightbulb moment for Lovett was when he realized you could consume a lot less sugar by dropping your soda and picking up a kombucha. The Revive Soda Pop Series is the most literal nod to all those “Seans” out there looking for tasty alternatives to sugary beverages, as each new flavor only contains 8g of organic cane sugar per serving.

Last year at Expo West, Revive Kombucha unveiled a game-changing shelf-stable kombucha in a can – Revive Sparkling Kombucha – which is currently sourcing over 70% of its volume from outside of the kombucha category, helping to bring more people into the wonderful world of kombucha. The release of the ReviveSoda Pop Series is a testament to co-founder Sean Lovett’s passion and dedication towards brewing approachable kombucha for the masses, super tasty alternatives to soda. After all, kombucha did change his life when he first discovered the beverage over ten years ago as he was able to kick his bad soda habit (six a day!).