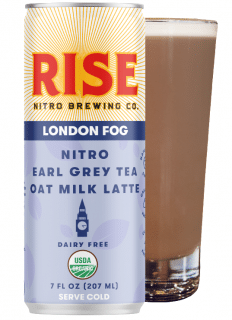 “Early on we knew that while nitro cold brew coffee would always be the core focus of our brand, we didn’t want to limit ourselves in terms of the products that we could create, hence the ‘RISE Brewing Co.’ brand name,’ said Grant Gyesky, co-founder and chief executive officer, RISE Brewing Co. According to the team, the decision to experiment with tea was an organic one. “While the majority of the RISE team is fueled by nitro cold brew, a number of team members are big tea drinkers, so when it came time to develop a new product it only felt natural to incorporate this tried and true tea blend,” said Melissa Kalimov, chief operating officer, RISE Brewing Co.

RISE Brewing Co.’s London Fog flavor will be available online and in retailers Summer 2020. It will be sold as singles, 4packs and 12packs.

A reflection of the blue and gray tones of the European city for which it is named, the London Fog can design features a clock reminiscent of Big Ben, set to 4:15 p.m. – the exact time when RISE delivered their first very keg.