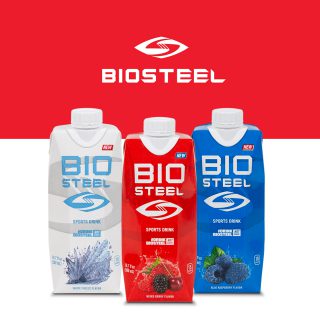 New York, NY – The U.S. Soccer Federation and BioSteel have announced a multi-year partnership designating the sports drink company a sponsor of U.S. Soccer. The multi-year agreement kicks off with the SheBelieves Cup, one of the premier women’s soccer tournaments in the world, taking place from February 18-24, 2021, at Exploria Stadium in Orlando, Florida.

The “Clean. Healthy. Hydration.” brand messaging will echo across all ranks of U.S. Soccer. BioSteel’s branding will be featured on towels, squirt bottles, coolers, and cups on sidelines, beginning immediately. BioSteel will receive significant exposure through its in-stadium digital signage, and will be amplified via digital and social integrations, mass-awareness media, and retail activity with Team BioSteel athletes and ambassadors.

“BioSteel is invested in the future of U.S. Soccer and commends the Federation for making a healthier choice when it comes to hydration and the environment,” said co-founder and co-CEO John Celenza. “As the number one purchased product in professional sports, BioSteel has long been one of the most trusted brands for high-performing athletes and is rapidly expanding into U.S. households as well. Through this partnership, we are reaching a new demographic of consumers interested in making a better-for-you choice for not only themselves but their families.”

“BioSteel is a dynamic and emerging brand that is dedicated to supporting our bold vision for growth for many years to come,” said U.S. Soccer Federation Chief Commercial Officer David Wright. “Our shared partnership goals are anchored in our commitment to providing our senior Women’s, Men’s, Youth and Extended National Teams trusted hydration products with zero sugar in eco-friendly packaging, designed to help them perform at their best. Beyond our players, we’re also excited to collaborate with BioSteel on healthy hydration education for our thousands of coaches, referees and our membership organizations.”

“Soccer United Marketing is proud to facilitate this multi-year partnership between U.S. Soccer and BioSteel,” said Carter Ladd, SVP Soccer United Marketing. “We are always looking to establish partnerships with brands who are committed to advancing the game in innovative ways and joining us as leaders in the soccer and broader sports community. We are excited to kick off the partnership at the SheBelieves Cup and look forward to working closely with BioSteel to advance sports hydration and nutrition across the Federation for many years to come.”

Originally formulated for professional athletes, BioSteel’s sports drink has gained popularity amongst consumers due to the authenticity of the brand’s partnerships with pro leagues, teams, and athletes, as well as the quality and of its products. Through its partnership with U.S. Soccer, BioSteel will continue to tell its authentic story that started in the locker room and is now spilling over to the mass retail market as it expands in the U.S. with recently signed distribution agreements across the nation.

BioSteel will also be the presenting sponsor of U.S. Soccer’s Player of Year Award, the highest yearly honor awarded to the best men’s and women’s soccer player in the United States. The Male and Female Player of the Year awards are the oldest and most prestigious awards of their kind, dating back to 1984 for the men and 1985 for the women. Additionally, BioSteel will receive exclusive title partner positioning in connection with U.S. Soccer Team training camps and exclusive title partner positioning in connection with Youth National Team Training Identification Centers.

For more information on where to purchase BioSteel’s sports drink, please visitbiosteel.com.

BioSteel is a North American operated sports hydration company that was built on the mandate of providing the safest, healthiest, and most effective sports drink on the market. BioSteel’s line includes a range of nutritional products including sports drinks, proteins, and everyday essentials. BioSteel products are currently readily available across North America, and globally with select retail partners or direct to consumers online, through www.biosteel.com.

Founded in 1913, the U.S. Soccer Federation has been the official governing body of the sport in the United States for more than 100 years. During that time, the growth of the sport has grown tremendously at all levels. As U.S. Soccer looks towards the future, its mission is to make soccer the preeminent sport in the United States. With a long-term and strategic approach, U.S. Soccer aims to accomplish its mission by supporting its members to increase participation at the youth and adult levels, develop world class players, coaches, and referees to consistently win at the highest levels on the international stage and serve the fans by engaging with them in deeper and more meaningful ways. For more information, visit ussoccer.com.