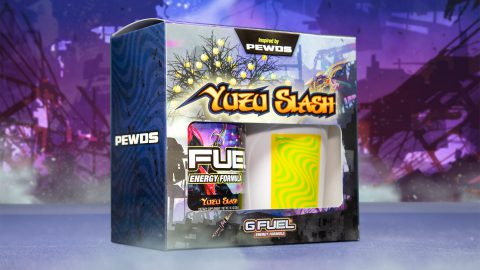 NEW YORK, N.Y. – G FUEL, The Official Energy Drink of Esports, announced its new “Yuzu Slash” flavor is now available to buy at gfuel.com. G FUEL created the flavor in partnership with Felix “PewDiePie” Kjellberg — a famous Swedish gamer and the world’s most popular YouTuber with over 110 million subscribers and over 27 billion views on the platform to date.

31-year-old PewDiePie created his YouTube channel in 2010 and gained fame for his hilarious “Let’s Plays” of popular video games such as Minecraft and Amnesia: The Dark Descent. As PewDiePie’s channel grew in popularity over the years, he expanded into producing various types of content, including comedy sketches, reaction videos, parody music videos, and news recaps. PewDiePie became the most-subscribed-to YouTube channel in the world in 2013, and in 2019 he became the first individual YouTuber to achieve the 100 million YouTube subscribers milestone.

G FUEL Yuzu Slash is sugar-free and loaded with antioxidants from 18 different fruit extracts. Each serving has only 15 calories and contains 140 mg of caffeine along with proprietary energy and focus-enhancing complexes. G FUEL Yuzu Slash is the second flavor that G FUEL and PewDiePie have co-developed and launched, with the first being the eponymous and lingonberry-tasting “PewDiePie” flavor.

G FUEL Yuzu Slash is now available for sale in 40-serving tubs and limited-edition collector’s boxes, which include one 40-serving Yuzu Slash tub and one 16 oz Yuzu Slash shaker cup, at gfuel.com/pages/pewdiepie. Be sure to also keep an eye out for a Yuzu Slash version of G FUEL’s powdered hydration formula launching in July.