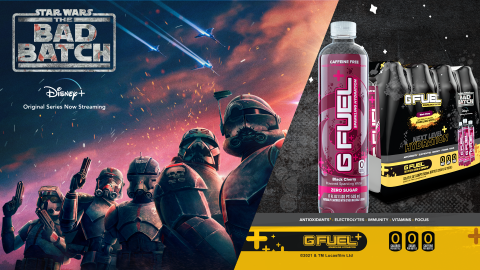 NEW YORK — You don’t have to travel to a galaxy far, far away to get a taste of the Star Wars universe. Let G FUEL take you into hyper drive with its brand-new product line: Sparkling Hydration — just in time for Disney’s “Star Wars: The Bad Batch,” an original Disney+ animated series that made its debut on May the 4th, also known as Star Wars Day.

G FUEL is bringing you two refreshing G FUEL Sparkling Hydration flavors that are “out-of-this-world”: Black Cherry and Kiwi Strawberry. Both flavors are available for U.S. customers to pre-order online now through May 10th. Pre-orders will start shipping in June.

“Today marks an important milestone for G FUEL. As big Star Wars fans, we’re honored to collaborate with the visionaries at Disney and Lucasfilm to introduce Sparkling Hydration to the world,” said G FUEL Founder and CEO, Cliff Morgan. “With Sparkling Hydration’s refreshing natural flavor, various health benefits, and just the right amount of carbonation, we’re confident that our fans will love it.”

Pre-order your G FUEL Sparkling Hydration today at gfuel.com/collections/bad-batch-hydration, and expect more flavors to land on G FUEL’s website in the future.

About Star Wars: The Bad Batch

Lucasfilm’s “Star Wars: The Bad Batch” follows the elite and experimental clones of the Bad Batch (first introduced in “The Clone Wars”) as they find their way in a rapidly changing galaxy in the immediate aftermath of the Clone War. Members of Bad Batch—a unique squad of clones who vary genetically from their brothers in the Clone Army—each possess a singular exceptional skill that makes them extraordinarily effective soldiers and a formidable crew.

Dave Filoni created the series and is an executive producer along with Athena Portillo, Brad Rau and Jennifer Corbett. Rau is also the supervising director and Corbett is head writer. Dee Bradley Baker leads the voice cast.