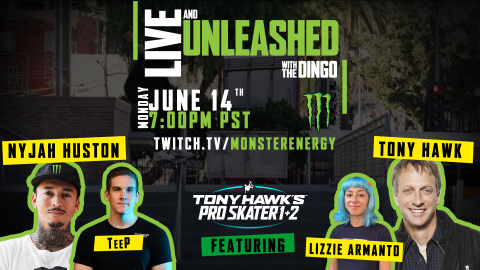 On June 14th, Monster Energy will be launching its new streaming series “Live And Unleashed” on Twitch kicking off with an epic battle between skateboard legends Tony Hawk, Nyjah Huston, Lizzie Armanto and pro-gamer Tyler “TeeP” Polchow in the iconic Tony Hawk’s Pro Skater 1 + 2 game. The stream will be hosted by popular snowboard personality and Monster Energy athlete Luke “the Dingo” Trembath.

In a round-robin format, Tony Hawk and Tokyo gold medal favorite Nyjah Huston will play head-to-head as their characters in the renowned Tony Hawk Pro Skater video game. Other challengers include Monster’s Lizzie Armanto, as well as pro gamer Tyler “TeeP” Polchow. Following the action, host Dingo will crown the first ever “Live Unleashed” champion.  As a bonus, viewers will get the chance to see Tony Hawk, Nyjah Huston and Lizzie Armanto in a real life skate session in Nyjah’s private skate park before playing themselves in the video game competition.

When the Tony Hawk Pro Skater video games were first launched in 1999, a cultural phenomenon swept over the world. In households everywhere, these games helped usher in skate culture into the mainstream. In fact, skateboarding will be debuting as an official sport in the Summer Games in Tokyo this year.

“I’m proud of how Tony Hawk Pro-Skater has expanded the skateboarding world,” said legendary skater Tony Hawk. “It has been one of the highlights of my career to see these games evolve and help inspire an entirely new generation of skaters and gamers.”

Future streams include a UFC-themed show featuring Monster Energy MMA fighters  Daniel Cormier and Stipe, taking their real-life rivalry into the gaming world, and pro gamer “Hungrybox” who will actually be getting in the octagon himself!  Later this fall, the third stream features an epic dual built around Monster Energy & APEX Legend’s partnership. Fueled by Monster’s unique energy blend, skaters, gamers and so many more from the Monster Energy Family come together for a unique collaboration between legends in their respective realms.

In partnership with multiple, Emmy award-winning TAUBLIEB Films, this not to be missed contest between skate and gaming legends will be livestreamed June 14th on Twitch

Based in Corona, California, Monster Energy is the leading marketer of energy drinks and alternative beverages. Refusing to acknowledge the traditional, Monster Energy supports the scene. Monster Energy is a brand that believes in authenticity and is the core of what its sports, athletes, esports athletes and musicians represent. More than a drink, it’s the way of life lived by athletes, sports, bands, gamers, believers, and fans.

About Luke “the Dingo” Trembath

The Dingo is a one-of-a-Kind personality whose fun-loving spirit and contagious energy has made him a mainstay on television for years. The former pro snowboarder is a leading voice of the action sports world & beyond, where he has done everything from announcing high profile sporting events, The MTV music awards to starring in 5 seasons of fuel TV’s “The Adventures Of Danny & The Dingo”. Once you’ve met him, you’ll agree – there’s only 1 Dingo. A true social chameleon – The Dingo’s ability to find common ground with anyone and adapt to any social situation makes him the perfect role model for kindness and acceptance among today’s youth.

TAUBLIEB Films is a multi-Emmy Award winning production company led by director/producer Paul Taublieb. His work includes long-form feature documentaries such as the theatrically released “Blink of an Eye,” about the star-crossed friendship between Michael Waltrip and Dale Earnhardt, now being made into a feature film with Sony Pictures Entertainment., Emmy award-winning ESPN 30 for 30 film, “Hawaiian: The Legend of Eddie Aikau,” narrated by Academy Award-nominated actor Josh Brolin. Also, the theatrically released “Fastest” about MotoGP racing and the Emmy award-winning Netflix documentary, “Unchained: The Untold Story of Freestyle Motocross,” named the best long-form documentary of the year, also narrated by Brolin. The Malibu, California-based company also produces a variety of long and short-form content for brands such as Monster Energy, ESPN, X Games, Showtime, NBC, ABC, Paramount Pictures and Ferrari, including viral videos with literally hundreds of millions of views.

TAUBLIEB Films has also enlisted the support of marketing agency and brand studio Zoned Gaming to provide their industry expertise and support the production efforts on the launch of Monster’s Twitch channel and live stream series.  Zoned will work closely under TAUBLIEB Films’ creative direction to craft and execute a strategy to help expand the Monster brand in the gaming entertainment world.