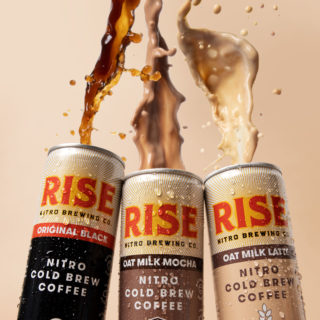 “We’re incredibly excited to now be offering our award-winning Nitro Cold Brew Coffee across Texas with an amazing retail partner in H-E-B, making this our largest retail presence in Texas to date” said Harry Connolly, RISE Brewing Co. Director of Sales. “Customers in Texas can now stay fueled with RISE, which they can find in the coolers at their local H-E-B store.”

RISE Brewing Co. launched their organic nitro cold brew coffees because everything else in the market was loaded with sugar, calories or harmful chemicals. So, the team set out to create the best tasting organic products on the market, starting with their Original Black nitro cold brew. Since then, RISE Brewing Co. has expanded to offer a line of Organic Oat Milks and most recently, organic non-nitro Multi-Serve Cold Brew Coffees in 32oz tetra packs to help provide a solution for the at-home consumer in the new working environment (back in 2015, the company’s first sales were of nitro coffee kegs to NYC offices).