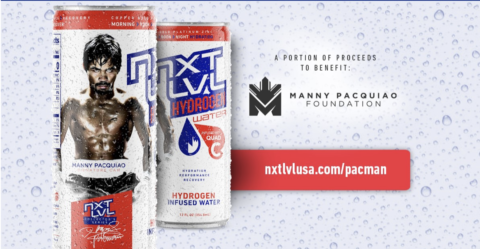 Boxing champion Manny Pacquiao is regarded as one of the greatest professional boxers of all-time and is the only boxer in history to win titles in eight different weight classes. In addition to serving as a Senator of the Philippines, Pacquiao is also the founder of the Manny Pacquiao Foundation (MPF), a California based non-profit, fighting for those less fortunate and spreading hope around the world.

NXT LVL Hydrogen Spring Water, sourced from natural springs, is infused with hydrogen and other all-natural supplements to aid in helping athletes prepare and recover from grueling training. Hydrogen water is spring water with hydrogen gas infused and suspended into the water. According to some resources, adding hydrogen gas to the water increases its health, wellness and antioxidant properties. It’s been touted for its ability to improve cellular energy, support the aging process, and improve muscle recovery after a workout.

Over the last three decades, the Takeover team has played a significant role in the growth and expansion of performance sports drinks and beverages throughout the entire beverage industry. The executive management team has over 100 years of research, manufacturing, sales, marketing, operations, design, and production experience in the beverage industry. Team Takeover members launched major brands with top-tier distributors including Pepsi, Budweiser, Coors and Miller Distributors, Whole Foods, and brands such as Sobe, Arizona Iced Tea, Xyience, and Ignite International.

Takeover Industries has just passed its 100-day mark. In the first 100 days, the NXT LVL brand was launched, entered into a unique endorsement and joint venture agreements, and launched three products into the US market.

On July 22, 2021 CSP named NXT LVL Hydrogen Spring Water as a finalist for Best New Product of the Year.