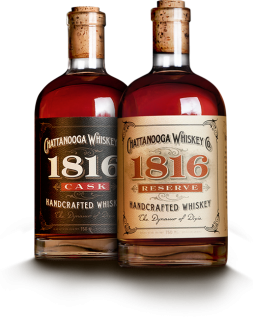 CHATTANOOGA (April 20, 2015) – Chattanooga Whiskey Co. was founded on a dream —to bring the tradition of making great whiskey back to the “Dynamo of Dixie” after nearly 100 years of prohibition. Chattanooga native and company founder, Tim Piersant, along with a team of whiskey enthusiasts and local supporters, launched the city’s first whiskey brand since prohibition in 2012. This spring, the company will began making the first legal whiskey in Chattanooga’s city limits in 100 years at the Tennessee Stillhouse, their new micro-distillery and tasting room.

Chattanooga Whiskey’s “Vote Whiskey” campaign kicked off on Facebook with a simple question: “Would you drink Chattanooga Whiskey?” The city was once home to a vibrant distilling community boasting more than 30 distilleries and a national reputation, and its legacy left a rich historic tradition in the community.

Recognizing that legislature had forbid the practice in certain counties and municipalities for nearly 100 years while other parts of the state maintained such longstanding, permanent whiskey production, Piersant and founding partner Joe Ledbetter, who has since left the company, detected a gap in the market and a stagnant lull in post-Prohibition whiskey culture in Chattanooga. They wanted to see if others felt the same.

The community response was overwhelmingly positive and kicked off a strategic planning process to bring whiskey back to the city. With no lobbyists and no money, Piersant and Ledbetter went to the people, and thousands of individuals from around the state and across the country joined forces to protest local laws and “Vote Whiskey.” As a result, the law was rewritten and today the first legal still in over a century is installed and poised for production in downtown Chattanooga.

Chattanooga Whiskey labeled their inaugural whiskey duo “1816,” in honor of the year that a trading post was established on the banks of the Tennessee River that would eventually become the city of Chattanooga. Both the “1816 Reserve” and “1816 Cask” have a mash bill of 75 percent corn, 21 percent rye and four percent malted barley. The “1816 Reserve” is a smooth and clean 90 proof blend infused with notes of vanilla, caramel, allspice and anise, lending the whiskey an overall light, spicy character. The “1816 Cask” is a more intense, robust 113.6 proof, boasting vanilla and dark toffee notes up front, cinnamon notes in the background and finishing with a warm, lingering spice. The 1816 line of whiskies was distilled by Lawrenceburg Distillers Indiana (now MPG of Indiana) and bottled in Nashville, Tenn. while Chattanooga Whiskey worked to change the laws at home. Currently the brand’s whiskey is available for purchase in Tennessee, Georgia and South Carolina.

“We knew bringing whiskey back to our hometown would be an uphill battle, and we wanted a whiskey substantial enough to fight that battle with us,” said Tim Piersant. “Both whiskeys in the dynamic 1816 line feature pre-prohibition style mash bills and match the bold and passionate whiskey culture in Chattanooga.”

Chattanooga Whiskey’s newest endeavor is debuting the city’s first post-prohibition micro-distillery, the “Tennessee Stillhouse.” Opened in downtown Chattanooga on Tuesday, March 24, 2015, the Stillhouse is currently readying for production. The Stillhouse will feature custom-distilling equipment from Louisville, Kentucky-based Vendome Copper and Brass Works, including a 100-gallon copper still nicknamed “Doc.” The distillery is located across the street from the famous Chattanooga Choo Choo and will also act as the headquarters of Chattanooga Whiskey. Tastings are offered daily Monday through Wednesday from 12 and 8 p.m., Thursday throughSaturday from 10 a.m. to 10 p.m. and Sunday from 12 to 7 p.m. Tickets may be purchased on-site at the Stillhouse for 12 dollars per guest. The Stillhouse will also be available for private events and tours.

“The Tennessee Stillhouse will fill a void that has existed in Chattanooga for nearly 100 years,” said Tim Piersant. “The distillery is a culmination of our years of commitment to restoring whiskey in the city, and will continue to bring the community together in celebration of Chattanooga and the rich whiskey culture of our state.”

The Tennessee Stillhouse will be located at 1439 Market Street, Chattanooga, TN 37402. The company looks forward to continuing its expansion and reinstating the vibrant whiskey culture that Chattanooga has been missing.

Chattanooga Whiskey Co. was founded in 2012 and operates out of Chattanooga, Tenn. The company’s headquarters will be located at its “Tennessee Stillhouse,” slated to open on Tuesday, March 24, 2015. The Stillhouse will be the city’s first whiskey distillery since 1915 Prohibition-era laws forced all distilleries in the city to close their doors. Chattanooga Whiskey currently offers its “1816” line of whiskeys including “1816 Reserve” and “1816 Cask” blends, which are currently made in Indiana through a partnership with Lawrenceburg Distillers. When the new Stillhouse opens, the products will be aged and bottled in Chattanooga, Tenn.