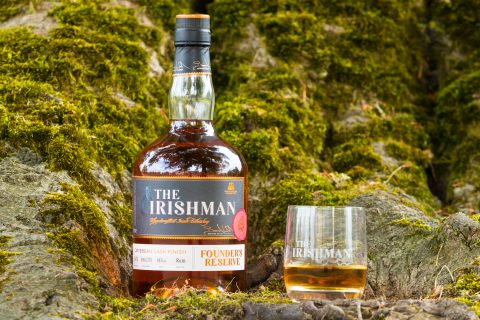 In recent years, as part of his research into new cask finishes for his portfolio of whiskeys, Walsh Whiskey founder, Bernard Walsh, has sourced casks from a range of countries including Spain, France, China, Kentucky and Italy. This limited edition, of just 12 casks, began in 2014 when he made the trip to the island of Saint Lucia in the West Indies in search of rare casks to give a special expression to his original whiskey.

The Irishman Founder’s Reserve, is distilled entirely in copper pot stills and Bernard’s journey took him to visit the famous St. Lucia Distillers (established 1932) where they also use copper pot stills to distil their rum. While there, Bernard handpicked 12 oak casks and he chose to age them in St. Lucia Distillers’ iconic Chairman’s Reserve Rum for a minimum of 2 years from 2015. The casks were subsequently brought to Ireland in the autumn of 2017 and used to finish a batch of The Irishman Founder’s Reserve for 6 months.

John Kelly, Commercial Director, Walsh Whiskey Distillery, said: “St. Lucia Distillers, who produce Chairman’s Reserve Rum, are renowned as a prestigious operation first established and run by the Barnard family for almost 90 years. Bernard was confident that he would be able to select from a high quality stock of well cared for casks imbued with a classical rum flavour. This Caribbean Cask Finish release will complement our highly successful ‘The Irishman Founder’s Reserve – Marsala Cask’ finishes of 2017. We hope the lucky few who secure bottles will enjoy this unique whiskey which is characterised by tropical fruits and spices.”

The release is limited to just 12 casks with 380 bottles per cask. Each bottle is individually numbered and signed by Bernard Walsh. This premium whiskey is now for sale across just 7 selected international markets namely; Ireland (including Dublin Airport), the USA, Canada, Russia, Germany, France and Holland. Of course bottles can also be purchased by visitors to Walsh Whiskey Distillery at Royal Oak in Ireland.

Established in 1999 by husband and wife, Bernard and Rosemary Walsh, and located in Ireland’s Ancient East region on the 18th century Royal Oak estate; Walsh Whiskey Distillery is a leading producer of premium and super-premium, triple-distilled, craft, Irish whiskeys – Writers’ Tears and The Irishman. Demand for these critically acclaimed whiskeys currently exceeds available supply in the 45 countries they are distributed to worldwide.

Set deep in the heart of barley-growing country, directly over the Barrow Valley Aquifer and framed by two hundred year old mighty oaks on the banks of the River Barrow, Royal Oak is the perfect place for creating exceptional quality whiskeys.

The distillery at Royal Oak produces all three forms of Irish whiskey – pot still, malt and grain – from its two production lines, featuring pot stills and column stills, in one still house. The manually operated distillery has the capacity to produce 650,000 cases (two and a half million litres of pure alcohol (LPA’s) or 8 million bottles) of whiskey annually.

Led by founder Bernard Walsh, and with a strong board of industry veterans, the company has built a portfolio of international award winning drinks brands. These include a range of 11 Irish whiskeys under the Writerṣ’ Tears and The Irishman brands, the Hot Irishman Irish coffee and The Irishman – Irish Cream liqueur.

Walsh Whiskey Distillery is a strategic partnership between Walsh Whiskey and Illva Saronno Holdings S.p.A., the leading Italian wine and spirits company whose portfolio of brands includes DISARONNO, the world’s favourite Italian liqueur. DISARONNO is distributed in over 160 countries and represents the “Made in Italy” image and taste worldwide.

St. Lucia Distillers dates back to 1932. First fashioned in 1999, Chairman’s Reserve Rum represents the iconic style of St. Lucian rum. It is a marriage of aged rums distilled in both copper pot stills and Coffey column stills, matured separately, and then re-entered into oak for blending and final finishing.