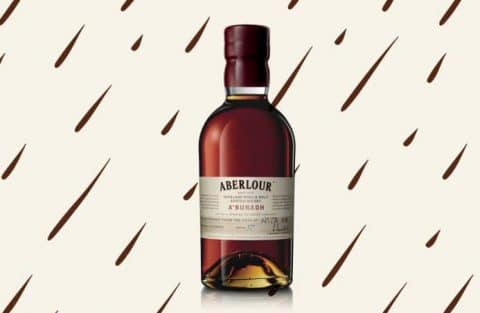 The Speyside distillery is primarily known for its affinity for Sherry cask maturation and the cask strength Aberlour A’bunadh, originally released in the 1990s, distinctly demonstrates these Sherry forward attributes. Quickly gaining a worldwide cult-like following that has continued for more than 60 batches produced over twenty years, the introduction of Aberlour A’bunadh Alba marks the first time Aberlour has released a formal line extension within the A’bunadh franchise.

As the sibling to a renowned Scotch, Aberlour A’bunadh Alba delivers many of the same distinct features associated with its precursor: cask strength, non-chill filtered, and non-age statement. However, instead of darker, velvety flavors synonymous with Sherry cask maturation, A’bunadh Alba is a complex mix of sweet baked apples notes alongside crisp citrus flavors imparted from the first-fill American oak Bourbon barrels it is matured in.

The name itself – A’bunadh Alba – also serves a double meaning and explanation for the new liquid: In Gaelic, A’bunadh means “of the origin” and Alba means “Scotland” but also refers to ‘Quercus Alba,’ a species of white oak used for maturation. Aberlour’s award-winning Master Distiller Graeme Cruickshank says, “Alba is the perfect counter-point to the classic A’bunadh, while still offering those familiar sweet, fruity notes which are rooted in the new spirit’s DNA.” He continues, “there are, however, stark differences in color and body, which should intrigue A’bunadh devotees and welcome new drinkers to the concept we lovingly know as ‘the original.’”

Andrew Weir, Aberlour US Brand Leader believes the expansion of the A’bunadh franchise is the perfect way to remind people why this storied distillery has garnered such a cult following around the globe. Weir says, “While A’bunadh Alba departs from Aberlour’s signature Sherry-forward profile, it still delivers the depth and elegance that has become synonymous with our whiskies. After over 20 years of A’bunadh, it’s an exciting time to bring an innovative expression to the A’bunadh and Aberlour family of award-winning whiskies.”

Aberlour A’bunadh Alba is a non-chill filtered, non-age statement, cask strength Scotch that is a permanent part of the award-winning whisky portfolio. A’bunadh Alba is available nationwide at fine wine and spirits shops (SRP: $90 / 750ml), restaurants and bars. For more information visit us at aberlour.com and follow us on Instagram @aberlour_us.

The Aberlour distillery, located in the heart of Speyside (one of Scotland’s premier whisky making regions), was built in 1879 by James Fleming, a grain merchant turned distiller, entrepreneur and later—a great philanthropist. The proof of Fleming’s generosity can still be seen today in the Fleming Hall, the local hospital and the Penny Bridge across the River Spey.The village of Aberlour is a historical place. In the ancient past, a druid community lived in the valley where they valued the oak trees and water source.They believed you could hear water spirits talking to each other, hence the name of the village Aberlour, Gaelic for “mouth of the chattering burn.”Today, Aberlour’s core portfolio includes three expressions double cask matured in bourbon and sherry casks – the Aberlour 12 Year Old, 16 Year Old and 18 Year Old – as well as the cask strength A’bunadh, which is matured exclusively in first fill Oloroso sherry casks, and Aberlour’s newest non age statement, Casg Annamh.