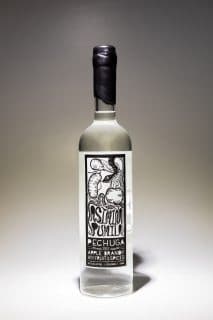 BALTIMORE, Md. — Baltimore Spirits Company (BSC) today announced the release of their annual Asimina Pumila Pechuga spirit, scheduled for Saturday, November 23rd starting at noon at their distillery in Union Collective in Baltimore. The specialty liquor is described by the distillery as “a reverent nod to Mexican Pechugas and a love letter to Maryland terroir.”

Asimina Pumila Pechuga is a spin on a rare style of mezcal; an agave spirit made primarily in Mexico. BSC takes their own smoked apple brandy and introduces locally foraged paw paws, persimmons, and black walnuts in a copper-pot still, then hangs a whole Maryland-cured country ham hung right in the middle to undergo an extended distillation process. The local fruits, nuts, and meat infuse the spirit into a one-of-a-kind drinking experience for special occasions. Due to Maryland’s very limited paw paw season, it can only be produced once a year.

“The Pechuga spirit has one of the most passionate followings of anything we do,” said Baltimore Spirits Company co-founder and CEO Max Lents. “We’ve sold out of the 2018 bottles, so our 2019 expression is right on time. We know some people that have been anxiously awaiting it, even across the country.”

Asimina Pumila Pechuga is 108 proof and available at Baltimore Spirit Company’s tasting room in the Union Collective for $59.99, as well as in retail liquor stores in Maryland, California, Nevada, Arizona, and Illinois. For more information, visit baltimorespiritsco.com.