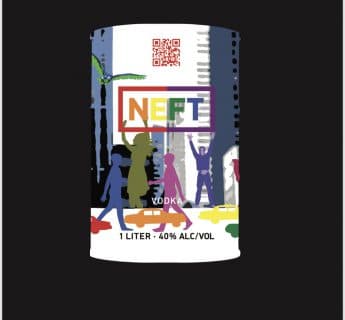 LOS ANGELES— NEFT Vodka will be launching a newly created limited-edition barrel just in time to celebrate LA Pride Week, with a portion of proceeds benefitting Project Angel Food throughout LGBTQ Pride Month. The festive new barrel will make its debut during the LA Pride Parade at a pop-up tent in collaboration with Tortilla Republic in West Hollywood, where NEFT cocktails and traditional Mexican fare will be available to consumers while they refresh and relax between festivities.  A colorful step-and-repeat showcasing this new design will be on display, creating a background of rainbow colored inspiration, along with an on-site photographer who will take photos for guests wanting a keepsake photograph that can be uploaded to social media.  This event is open to the public over 21 years of age.

NEFT Vodka is a “for cause” brand that is involved with charities throughout the Los Angeles area. Each month, NEFT selects a charity to highlight on their website, as well as social media.  In honor of LGBTQ Pride Month, they have selected Project Angel Food as their spotlight charity. Touching millions of people over the past 30 years, Project Angel Food prepares, cooks and delivers 10,000 meals a week to people living with HIV/AIDS, cancer, kidney failure, heart disease and lung disease, bringing comfort and hope every day.  The launch of NEFT’s limited-edition barrel not only celebrates diversity and community, but will also help to support a charity that has been deeply involved in the LGBTQ community for many years.  During the months of June and July, NEFT Vodka has partnered with participating venues in West Hollywood to develop specialty NEFT cocktails available for consumption.  A portion of the proceeds for each cocktail sold will go to support Project Angel Food, with a minimum of $500 guaranteed.

The NEFT Vodka limited-edition barrel was designed by Los Angeles based mixed media artist, Paul Robinson, who chose a fun and wonderful day in the neighborhood for the inspiration of this artwork.

Founded in 2011, and first arriving in the U.S. in 2017, NEFT vodka is an ultra-premium vodka conceived in Russia and crafted in Austria incorporating 4 different types of non-GMO rye grain and pristine Alpine water. Since debuting in the U.S., NEFT has received Double Gold medals two years in a row from the prestigious San Francisco World Spirits Competition (2018, 2019), and was the only vodka to be awarded “Best in Show” in the vodka category in 2018.  For additional information visit neftvodkaus.com.

Founded by Marianne Williamson, a highly regarded author, lecturer, and activist, Project Angel Food was an early-responder to the HIV/AIDS pandemic and became a cultural icon of the LGBTQ, and other communities. Galvanizing a diverse array of people, the organization is seen as one of the first gay/straight alliance in the service of those in need.