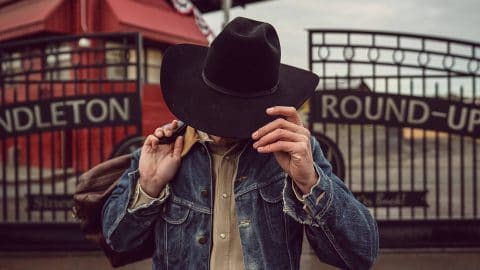 HOOD RIVER, Ore.– Pendleton Whisky steps into the national spotlight through the launch of a major marketing campaign to invite people into the world of rodeo and the brand’s namesake home – the revered Pendleton Round-Up. The multi-million-dollar integrated campaign is comprised of TV advertising, social and digital media, a title sponsorship with Professional Bull Riders (PBR) and an all-new bottle design. The new TV spot, from preeminent commercial director Jake Scott, documents the cowboy spirit and shows an honorable and hardworking bull rider learning to conquer his 8-second ride.

The Oregon-based brand is making an aggressive move to expand nationally beyond its current foot print in the Pacific Northwest, staking its claim as the “whisky of the Great American West.” Since launching in 2003, Pendleton has experienced tremendous success, with more than 300 percent growth in annual cases sold since 2008.

Filmed in Pendleton, Oregon, the TV commercial features a working ranch and the Pendleton Round-Up arena – home of the 100+ year-old rodeo regarded as an enduring cultural treasure – as well as members of the local Pendleton community, along with professional cowboys and livestock including bucking horses and rank bulls.

“Rodeo has always been the heart of Pendleton Whisky. No matter where you live, there is something about rodeo and the cowboy lifestyle that appeals to everyone,” said Dylan Beyer, Proximo’s Pendleton Whisky senior brand manager. “Pendleton is a whisky for those who embrace the attitude of the American West, and as the American Whisky category diversifies, it is the perfect time to bringPendleton’s authenticity to a national stage.”

In its first national TV campaign, Pendleton Whisky turned to Brooklyn-based creative agency Dead As We Know It and partnered with Scott, the celebrated director known for his signature commercial work and videos for R.E.M., U2 and the Rolling Stones. Together, they created a “brand world” worthy of Pendleton’s cowboy legacy and rodeo heritage, filmed on location against the rugged natural beauty of the American West.

“Working with a brand shaped by the spirit and perseverance of the American cowboy, the rodeo and the historic Pendleton Round-Up, there was no shortage of authenticity,” said Mikal Reich, creative director of Dead As We Know It. “We were thrilled to work with Jake Scott to tell this story in the most beautiful and elevated way.”

The campaign launch will kick off with the new TV commercial debuting April 8, airing nationally on sports and lifestyle broadcast networks. The campaign is complemented by a newly designed bottle, featuring a distinctive western typestyle, prominently showcasing Pendleton’s red bucking horse and rider symbol along with the “Let’er Buck” tagline, familiar tributes to the Pendleton Round-Up. Pendleton Whisky is also reaching consumers as the Official Whisky of the 2019 PBR Velocity Tour, featuring 31 events in markets across the U.S. As the tour’s title sponsor, Pendleton Whisky is connecting with consumers on-site at each live event, as well as through the PBR digital content and the tour’s TV broadcast schedule.

Through this new marketing campaign, Pendleton Whisky invites viewers to join its exhilarating world. It’s simple: by enjoying Pendleton, anyone can live like a cowboy.