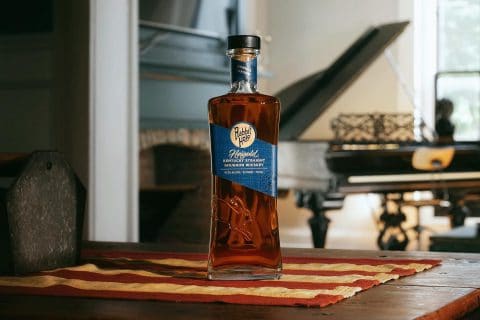 Heigold’s unique mash bill was developed by Kaveh who continues to blaze a trail in the bourbon business by marrying heritage techniques with innovative mash bills. A super-premium expression that puts Rabbit Hole’s spin on America’s native spirit by featuring a high concentration of malted grains, Heigold is comprised of 70% corn, 5% malted barley and 25% malted rye to deliver heightened malted-flavor characteristics.

Made with a proprietary cooking process and distilled at Rabbit Hole’s spectacular urban distillery, Heigold is aged in #3 wood-fired, toasted and charred new American Oak barrels and like all products in the Rabbit Hole portfolio, has a low entry proof of 110 for deeper complexity. Aged for just under four years, Heigold is not chill filtered; it retains the whiskey’s natural flavor and texture for a true high rye bourbon experience. Heigold is 95 proof/47.5 ABV.

Kaveh Zamanian said, “My mission has always been to bring thoughtful innovation to the spirits landscape. I call it ‘innovation with a lowercase i.’ So when it came to developing the recipe for Heigold, a process I started four years ago, I stepped away from the conventions of high rye bourbon to create a unique mash bill that features the highest quality malted rye imported from Germany. The rye is sourced from one of Europe’s most important regions for rye grains and it really comes through in the glass with a one-of-a-kind taste. I’m very proud of Heigold and look forward to sharing it with bourbon lovers and spirits enthusiasts across the country.”

With a sweet nose that evokes toasted malt, Heigold brings forth creamy notes of butterscotch with bursts of citrus, and finishes with intriguing notes of pepper and spice. It is best enjoyed neat, over ice or according to the imbiber’s preference.

Rabbit Hole Heigold High Rye Straight Bourbon Whiskey will be a full-time addition to the Rabbit Hole collection of American whiskies. Heigold will debut at on and off-premise locations beginning in late September and will sell for a suggested retail price of $69.99 per 750 mL bottle.

Heigold was named after Christian Heigold, a German immigrant who was a stonemason by trade. Taken with his love of America and his hometown of Louisville, he adorned the façade of his 19th century mansion with American icons, honoring the U.S. for the opportunity given to immigrants like himself. Heigold mirrors the patriotism and passion for Louisville that is shared by Rabbit Hole’s founder/whiskey maker Kaveh Zamanian, he himself an immigrant who loved the U.S. before he ever set foot on American soil.

Heigold is presented in Rabbit Hole’s sleek, signature bottle which features the brand’s iconic rabbit marque inlaid into the glass beneath a die-cut sash. Within the label is the brand name of Heigold, boldly expressed in script.

Each of Rabbit Hole’s expressions now follows this new approach to branding, an initiative that Kaveh and his team developed more than a year ago.

Michael Motamedi, chief marketing officer of Rabbit Hole said, “In early 2018, the buzz for Rabbit Hole really began building. At that time, we had already planned for the launch of Heigold and Kaveh had other new expressions in development. Knowing that the Rabbit Hole portfolio would continue to grow, we decided to give each of our spirits a distinctive name that evokes the ethos of Rabbit Hole. Now and moving forward, every product will have its own identity, while laddering up to the Rabbit Hole brand. Rest assured that although our whiskeys have new monikers, they’re all the very same liquid that’s been sipped and savored since we came on the scene.”

In addition to Heigold, the Rabbit Hole portfolio features three exceptional core whiskeys, unified by Kaveh Zamanian’s uncompromising approach to whiskey making. Crafted according to recipes created by Kaveh and made in small batches with less than 15 barrels per batch, each Rabbit Hole product features a robust malted grain configuration that delivers unique flavors and added complexity. All barrels used in Rabbit Hole spirits are hand-selected, and unlike most barrels, are toasted and charred to bring out caramelized flavor, and the liquid is never chill filtered.

Like Heigold, the whiskies in Rabbit Hole’s growing portfolio have been given proper names that reflect the Louisville influencers who have gone down “rabbit holes” of their own and inspired Kaveh Zamanian as he built the brand.

Cavehill is a four-grain, Straight Bourbon Whiskey that pays homage to the final resting place of generations of proud Louisville distillers. This expression builds on the legacy of bourbon’s greatest pioneers and sets a new standard for American whiskey. Honey, fresh apples and spice come to life when nosed, and on the palate, creamy flavors of orange, honey and mint mingle with hints of toasted grain. The enduring finish speaks of vanilla and custard.

Boxergrail is a straight rye whiskey inspired by the greatest boxer and Louisvillian of all-time. Bold and unexpected, this rye echoes his uncompromising spirit and sense of refinement, characteristics befitting of a champion.

Rabbit Hole’s Sherry Cask Finished Bourbon is named for Kaveh’s wife, Heather, the muse behind the brand. A Louisville native and bourbon enthusiast, she lured Kaveh away from his beloved Scotch and down a rabbit hole he may have never dared alone. Dareringer celebrates her sweetness, charm and elegance.

The experience of Dareringer begins with notes of sherry with traces of caramel and cherry. On the palate: raisins, currants and cherries coming to life, hinting almond and vanilla. The finish is light with a touch of dryness.