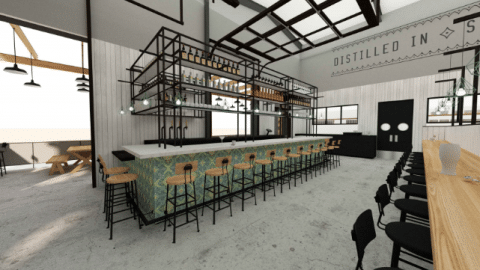 SANTA CRUZ, Calif.– Venus Spirits has finalized plans and has begun to construct a new 11,500 square foot warehouse located in the developing Delaware Addition which is located in the bustling Westside, Santa Cruz neighborhood. The additional location, which is directly adjacent to their current facility, will include a distillery and barrel storage capable of producing up to 50,000 cases annually.

The center point to the new building will be Venus Spirits Cocktails and Kitchen, a new restaurant space designed by Stripe Design Group. The 100-seat restaurant will be focused around a cocktail experience utilizing various Venus Spirits distilled spirits and will be complemented by an assortment of from scratch snacks, small plates, fresh salads, and sharable entrees.

For founder/distiller Sean Venus, the commencement of construction marks two years of planning.

“I am so excited for the next phase of our business coming to life. This new space will not only allow us to meet a growing demand for our spirits, but will allow us to grow stronger and deepen the connections with our community.” The expected opening date for the new restaurant and distillery will be winter/spring 2020.

The current distillery and tasting room space will be used for storage and bottling.

The Delaware addition is currently home to Rainbow Light headquarters, and construction has begun on the Nonprofits Insurance Alliance building.

Venus attended the University of Oregon during the initial renaissance of craft beer and began working as an assistant brewer at the age of 20. He held various positions with other breweries in Eugene and spent six years with Gordon Biersch Brewing in San Jose, CA. For the next eight years he worked for several organic food companies. Inspired by his love of whiskey, Venus made the decision to start a craft distillery in Santa Cruz in 2012. After finding a site, procuring equipment and completing all the necessary paperwork, distilling began in May of 2014. Venus Spirits now produces fourteen different spirits and operates a tasting room where visitors can enjoy tastings or a cocktail.