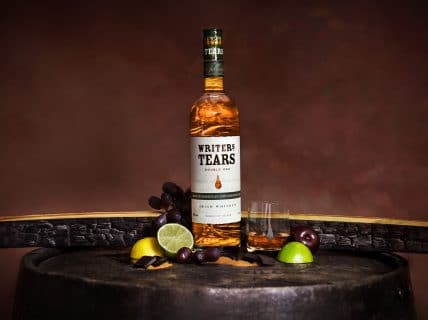 Writers’ Tears Double Oak, is a blend of the two premium whiskey styles aged in two types of wood — American and French Oak. It is triple-distilled, non-chill filtered and bottled at 46% ABV. The new expression is made possible by a close collaboration between the Walsh family in Ireland’s County Carlow and the Legaret family in Cognac, France.

The American oak contributes bolder flavors with more sweet and vanilla overtones due to the presence of more lactones in the wood. The French oak, on the other hand, generates silky tannins which yield a light sweetness combined with fruity flavors that persist in the mouth.

Bernard Walsh, founder and managing director of Walsh Whiskey, said: “We are driven by our quest to create the perfect ‘drop’ of Irish whiskey. Our fascination with what has gone before us provides an endless well of inspiration and that led us to work our way back to exploring what French oak first brought to Irish whiskey’s taste profile in the 1800s. I look forward to hearing what followers of Writers’ Tears think of our addition to the family.”

The use of French oak casks in the maturation of Irish whiskey was widespread through the 17th and 18th centuries. This changed in the 19th century, with the arrival of more affordable and larger quantities of American oak casks, which was driven by the surge in exports of Irish whiskey at the time. This gave rise to a unique ménage of both French & American Oak barrels being used for maturing Irish whiskies and the resultant blends gave a new twist in the flavor profile of Irish pot and malt whiskeys.

As one of Walsh Whiskey’s core expressions, Writers’ Tears Double Oak is available to all markets, and will be first available in the USA, Russia, UK, Germany, France, the Netherlands and Ireland (including Dublin Airport).

Established in 1999 by husband and wife, Bernard and Rosemary Walsh, Walsh Whiskey is a leading producer of premium and super-premium, triple-distilled, craft, Irish whiskeys – Writers’ Tears and The Irishman. Demand for these critically acclaimed whiskeys currently exceeds available supply in the 50 countries they are distributed to worldwide. Led by founder Bernard Walsh, and with a strong board of industry veterans, the company has built a portfolio of international award winning drinks brands. These include 7 core expressions in a range of 14 premium Irish whiskeys under the Writers’ Tears and The Irishman brands, the Hot Irishman Irish coffee and The Irishman – Irish Cream liqueur.