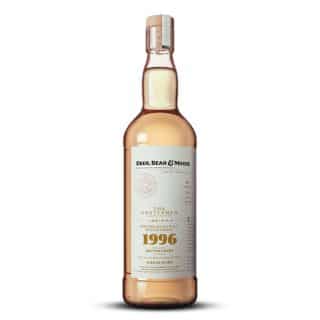 Flaviar, the leading members club for fine spirits enthusiasts, has teamed up with STXfilms on their upcoming theatrical release The Gentlemen. In celebration of the film’s release on January 24, 2020 Flaviar will release just 420 bottles of Deer, Bear & Moose The Gentlemen, a special 23-year old Speyside Scotch distilled in 1996.

From writer/director Guy Ritchie comes The Gentlemen, a star-studded sophisticated action comedy. ‘The Gentlemen’ follows American expat Mickey Pearson (Matthew McConaughey) who built a highly profitable marijuana empire in London. When word gets out that he’s looking to cash out of the business forever it triggers plots, schemes, bribery and blackmail in an attempt to steal his domain out from under him (featuring an all-star ensemble cast including Charlie Hunnam, Henry Golding, Michelle Dockery, Jeremy Strong, Eddie Marsan, Colin Farrell, and Hugh Grant).

With plenty of shots in the film featuring whisky, it made perfect sense to create an ode to the film in whisky form.

Deer, Bear & Moose is a Flaviar exclusive brand which showcases rare, mysterious and elusive barrels for Flaviar’s membership of adventurous spirits enthusiasts. Established in 2015, Deer, Bear & Moose is a selection of exclusive private bottlings curated by Flaviar that makes great, typically inaccessible whisky accessible to those who love it. To date, there have been 17 coveted releases including Bunnahabhain 1989, Auchentoshan 1997, and Tamdhu 1999.

There are just 420 limited-edition bottles of Flaviar presents Deer, Bear & Moose The Gentlemen, a batch size chosen as a nod to the film’s storyline.

Stephanie Carpenter of Allied Global Marketing, STXfilms’ agency of record for partnerships, explained, “We reached out to Flaviar because we wanted to create a special whisky to celebrate the launch of The Gentlemen and help us reach a whisky enthusiast community.  We sought to find a partner that embodied the rogue, entrepreneurial spirit exemplified in the film – Flaviar fit the bill perfectly.”

For this star-studded edition of Deer, Bear & Moose, Flaviar went to Scotland to uncover something fresh, action-packed and absolutely fun. This tale of great wit is deserving of a stiff drink and the result is Deer, Bear & Moose The Gentlemen.

Commenting on Deer, Bear & Moose The Gentlemen, Grisa Soba, co-founder of Flaviar said: “The juice from Deer, Bear & Moose The Gentlemen comes from the Glentauchers distillery in Speyside, Scotland, established way back in 1897. We cherry picked a very special expression to honor this London crime story: a 23-year-old Scotch finished in ex-Bourbon hogshead barrels and a first fill cask from Koval. We tried to capture the intrigue and excitement of The Gentlemen and we hope you can taste it in your glass.”

Deer, Bear & Moose The Gentlemen by Flaviar is a 23-year old Speyside Scotch bottled at 47.2% ABV in 1996 and priced at $220. This cinematic quality offering is available at www.Flaviar.com.

Founded in 2012, Flaviar is the world’s largest premium spirits club, with operations in the US and Europe. Flaviar offers a better way to experience fine spirits.

Flaviar members enjoy a full suite of benefits including quarterly tasting boxes and full-size bottles sent directly to their home, invitations to exclusive spirits events, access to rare and original spirits available only to members, free shipping, over 200K member reviews and more.

You’ve got to try this!

STX Entertainment is a global, next-generation media company whose mission is to unlock the value of the direct connection stars have with their fans through the development, financing, production, marketing and distribution of film, television, digital video, music and live entertainment content.  It is the industry leader in transforming beyond traditional platform-driven content to creating talent-driven enterprises.

In business for over 30 years, Allied has built upon its roots in advertising and publicity for movie studios to become a global leader in entertainment, culture and lifestyle marketing. Allied’s global team of specialists, over 400 strong across 23 offices in North America and Europe, create campaigns that drive conversion for some of the world’s biggest brands and their diverse customers across film, TV, streaming, sports, gaming, live entertainment, cultural institutions, hospitality and consumer brands.